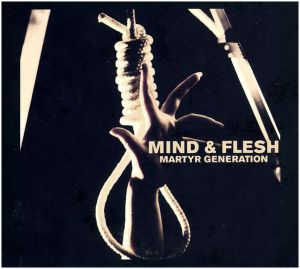 Although Norway might not be a highly recognised country for death industrial and power electronics music, this has done little to hamper the enthusiasm of Anders B with his Mind & Flesh project.  It also seems this is not Anders first release, as he has previously issued two albums under a separate moniker Babyflesh, before rebooting under the guise of this new project name.

Being the Mind & Flesh debut, ‘Martyr Generation’ consists of nine tracks recorded between 2005-2008 and by way of indicative sonic markers, this is musically in the vicinity of early Genocide Organ, early Haus Arafna, Brighter Death Now etc, yet does manage to evoke a sound of its own.  Overall the album follows a path of being loose and unpolished in delivery, being built on repeated looped structures to form the basis of each piece.  Likewise the tracks are structured enough to not appear improvised, but chaotic enough to suit its death industrial/ power electronics guise.

The roughly stilted loops and acerbic distorted vocals of ‘Walking Target’ introduce the album and include the dually consoling/ menacing lyrics of: “I will keep you safe. Nothing is going harm you. As long as you play my game”.  Yet things really kick in with full force on ‘From the Cradle to the Grave’ with fast, pulsing metallic loops and flanged vocals that hint at the vocal style delivery of the Grey Wolves. This track is blunt and to the point and all the more effective for it, and continues in a similar stylistic slant on ‘Alone Against All’ which also brings the mid era Brighter Death Now compassions to the fore.  The elongated length of ‘Blodskam’ evokes some great droning death industrial (complete with distant wailing chants), whilst ‘Destroyers’ achieves a more loose rhythmic sound with its various loops and decent amount of crisp and sharp distortion.  Noting that ‘Purgatorium’ is credited to both Mind & Flesh and Atrax Morgue (aka the late Marco Corbelli who regrettably committed suicide in 2007), there is no further information regarding this collaboration, but obviously this was composed before Marco’s untimely passing.  Here ‘Purgatorium’ presents a cavernous atmosphere built with a basic yet crushing beat and sermon like distortion treated vocals, being broadly characteristic of the minimalist approach of Atrax Morgue.  Alternately the final track ‘Clashing Icons’ bleeds out over an extended 10 minute length, evoking a cavernous death ambient soundscape of echoes, metallic textures and occasional vocal wails (…a commendable conclusion which is certainly a hell of a lot calmer than much of the material which precedes it).

With ‘Martyr Generation’ Mind & Flesh delivers a solid and no frills death industrial/ power electronics album.  Whilst it may display its influences fairly prominently, when armed with such conviction and delivered with such passion as displayed here, it provides Mind & Flesh with requisite individualistic flair, thus worthy of full attention. 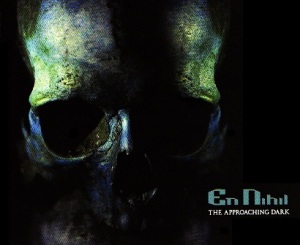 Album opener ‘The Tomb of Empire’ acts as a relatively short intro piece, which has a tonal range spanning a low humming drone at the bottom end, coupled with blasting static at the forefront and upper ranges.  This piece then bleeds seamlessly into ‘Frozen Posture’, which with its rumbling mass and subtle textural elements shifts towards an isolationist ambient frame.  Alternately ‘The Hearts Relent’ is a total surprise (given the tracks which precede it), containing a melancholic fragility evoked though through a sparse orchestral melody and distant hummed vocals.  Although unexpected, it works exceptionally well in a restrained and cinematic dark ambient style.  ‘Futile Man – The Weight of Absolution’ is another stand out, with tonality quite akin to the fractured and digital filtered laptop sound of Fennesz – although this piece does move away from the summery electronica atmospheres of the aforementioned project to heavier distorted death industrial realms.

In covering yet more sonic territory ‘Souls to Cease’ delivers some buried factory ambience which builds in static intensity as the piece progresses.  Likewise ‘Vulture Reign’ pushes a heavier and more forceful power electronics sound with its rough loops and cascading noise and squalled distortion – excellent stuff.  Final album track ‘Darkfall’ provides another moment of listening respite, being a bleak and desolate slab of dark ambience built on a cyclic melody and muffled distant storm rumblings – a musical statement of relative calm and great concluding piece.

Although largely sitting at the heavier end of death industrial and power electronics genres, this is a varied and considered release with some excellent forays into dark ambient territory.  With the sound production En Nihil illustrates clear attention to detail with the separation of tonal elements, which only enhances the listening experience.  Gatefold digi-card sleeve with suitably dark imagery rounds out this tasty release. 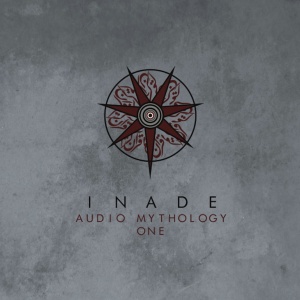 As is the case with the publication of any new release from Inade this is usually reason enough to celebrate, however with reference to the album’s title it is indicative of being the first in a series of archival material.  So given that subsequent releases are slated in the ‘Audio Mythology’ series, clearly this is additional reason to celebrate. Regarding ‘Audio Mythology One’, the album consists of eight tracks derived from 2001-2012, with the liner notes revealing that four tracks were released on various compilations, whilst the remaining four were previously unreleased until now.  It also seems that tracks have been further mixed, edited and in some cases reworked in bringing these tracks to fruition for this release.

Noting the span of years in which these tracks are derived it is appropriate to reflect on Inade’s modus operandi over their 21 year history. Upon such refection an evident characteristic has been Inade’s inclusion on a significant number of compilations, where submitted tracks have formed important parts of their sonic puzzle and vital stepping stones in the evolution of their music.  Ultimately this tells volumes of the commitment of Inade to their craft and is a far cry the attitude of many acts that seem comfortable with using compilations to off load second rate tracks.  Thus based on the above circumstances ‘Audio Mythology One’ contains fantastic material and through the further editing, mixing and mastering comes across as a release that is as strong as any of their main ‘official’ albums.

Referencing its scope and style, the collection of tracks which makes up ‘Audio Mythology One’ are very much rooted in the later era of the group and the sound of what Inade do best.  That is esoteric mysticism set to sound – emanations from the void which intertwine deep space cosmic tones with otherworldly and occasional orchestral elements.  Yet on a more bland descriptive level this can be defined as experimental music which combines aspects of abstract modern classical music with more traditional dark ambient material.  Variously the tracks are meticulously composed with sonic elements including: slow wailing of ceremonial horns, deep ritualistic percussive beats, melancholic orchestral elements (strings/ brass), multi-layered and interweaving drones, echoed and abstract metallic/ crystalline/ shimmering sonic textures, disembodied vocals and well-placed dialogue samples to flesh out thematic context.

Across the span of their career Inade have managed to reach spiralling heights through the refinement of the compositional skills and in the process have created a multi-dimensional aural world.  Their status is clearly evidenced by their ability to effortlessly evoke archaic and universal vistas of a monolithic scale, which effectively elevates the listener out of a limited human scale perspective.  As an overall experience ‘Audio Mythology One’ is exceedingly masterful – transcendent even – and in many ways trying to describe the album merely in context of the sum it its parts does not do it adequate justice.  Ultimately Inade’s ‘sonic sculptures’ need to be experienced via full audio immersion (…noting that ‘Audio Mythology One’ has been released in limited edition of 300 vinyl LP/ CD set and unlimited CD for such purposes). Without a doubt ‘Audio Mythology One’ is far more than a mere stop gap release and is another welcome addition to Inade’s discography.