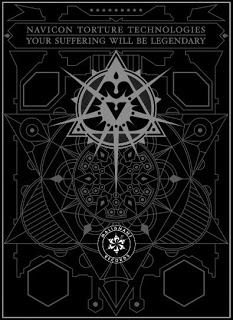 ‘Your Suffering Will Be Legendary’ does not herald the return of Navicon Torture Technologies (NTT), but resurrects a collection of bonus tracks that were originally packaged together with ‘The Gospel of the Gash’ double album (…mind you in a super limited box set of 100 copies).  Incidentally ‘The Gospel of the Gash’ which was released in 2009 also constituted the final official release from NTT before Lee Bartow relaunched under the new guise of Theologian.

Regarding the eighteen tracks that make up ‘Your Suffering Will Be Legendary’, these are not merely left over studio material, but constitute collaboration tracks from eighteen different artists, both well known and obscure.  For posterities sake the acts which feature alongside NTT include (in order of appearance): Aun, Black Sun, Cenotype, The [Law Rah] Collective, Inswarm, Covet, Autoclave I.I, Herbst9, Hecate, Jarboe, Deutsch Nepal, Fragment King, Kristoffer Nystroms Orkester, Prometheus Rising, Steve Moore, Eidulon, Troum and The Bird Cage Theatre.

Given the magnitude of material here (which spans two CD’s and a total play time of a whopping 143 minutes), there is little to be gained by slogging through a track by track review.  Yet to provide an overall impression, the music sits mostly within a droning/ dark ambient style, with some pieces pushing towards heavier death industrial and power electronics spheres (being entirely consistent with the varied sound NTT is recognised for).

Despite its collaborative nature all tracks are of a high quality standard that manage to hang together as a consistent and coherent album.  Clearly this can be put down to NTT’s base material providing a degree of tonal consistency, which has allowed contributors to weave their own varied elements into the compositions.  Although that there is nothing on here which could be deemed as a weak contribution, conversely some of the stand out moments to this ear includes:

Beyond the musical sphere, the packaging is also exceptional and mirrors that of the DVD sized, multi panel fold out cover of ‘The Gospel of the Gash’.  Either as an essential bookend to ‘The Gospel of the Gash’, or otherwise as a stand-alone release, ‘Your Suffering Will Be Legendary’ is a welcomed more formal addition to NTT’s legacy.

1 thought on “Navicon Torture Technologies – Your Suffering Will Be Legendary”