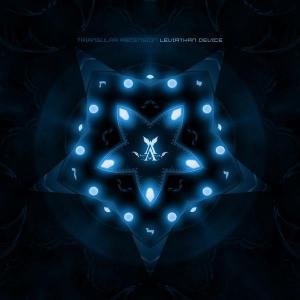 The Canadian label Cyclic Law has over the course of the last ten years slowly raised their profile to that of a leading light within the broad fields of dark ambient music.  During this process they have released established acts, built the profile of younger ones and launched the careers of others.  Triangular Ascension, a Venezuelan dark ambient project, is one such act that Cyclic Law have recently launched but I have only just picked up on.  However from a cursory listen it is absolutely clear as to why Cyclic Law signed Triangular Ascension to release ‘Leviathan Device’ as their debut (which I understand was submitted to the label as a demo).

Having listened to a substantial number of dark ambient albums over the past 17 years, there are few albums which have an immediacy such as this, i.e: being able to launch themselves into your psyche from the first listen and also to reveal new sonic elements on subsequent listens.  In general terms ‘Leviathan Device’ inhabits sweeping dark ambient territory, but rather than being murky and shadowed in scope, this is multileveled in its sonic clarity.  The tonal qualities include deep and stormy bass drones, galactic fog horns, melodic wailing textures, subtle rhythmic/ percussive elements and detailed textural noise at the higher ends.  In this regard the sound production is immaculate, achieving a crystalline sound where all elements are balanced and audible within the mix.  Yet rather than being floating, abstract and passive like many dark ambient acts, ‘Leviathan Device’ is an active and engaging listening experience.  Here a subtle rhythm undercurrent and cinematic quasi-orchestral melodies constitutes the engine which drives the overarching atmosphere of the album and provides a central focus throughout.  There is also a significant degree of  variation between the nine album tracks which interlink over an hour playtime. Some tracks are subdued, others forceful, but always the flow between pieces is impeccable, again raising the cinematic scope of the material.  Also whilst being clearly within a dark ambient style, this is not all doom and gloom as the use of slow droning melodic elements evokes a contemplative tone than anything particularly depressive.

Even if dark ambient fare is only of passing interest to you, do not ignore this act.  Triangular Ascension deliver meticulously detailed and animated dark ambience of the highest calibre, which highlights the pure folly on my part for not checking them out sooner.