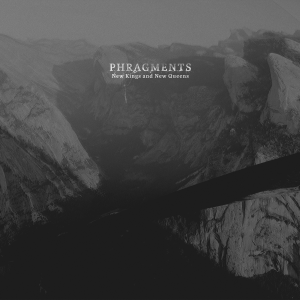 Phragments finally return with new recorded material, some 5 years on from the last full length ‘Earth Shall Not Cover Their Blood’, also issued on Malignant Records.  However interestingly the promo material indicates that rather than heralding a new direction for Phragments, this new album should be considered as a special and stand alone release.  So from the first cursory listen it is evident that for this album at least Phragments have moved away from structured neo-classical (and occasionally martial infused) compositions, instead opting for more a more abstract dark ambient version of their sound.  Likewise the six ‘chapters’ (as referred to on the cover) which make up ‘New Kings and New Queens’, have effectively been composed into a singular flowing 32 minute composition.

Noting its subdued tone and distant stormy atmosphere, the main focus is obviously not on any overt neo-classical elements, yet there are orchestral tonal elements buried in the mix giving the impression of a ghostly and muted neo-classical atmosphere.  Here vast widescreen drones are underscored by a muffled orchestral tonality, which evokes a stoic and serious mood which evolves and unfolds at a catatonic pace.  Yet the sustained solemn procession gives way to sacral atmospheres on both ‘When Memory Fails, We Disintegrate‘ and ‘New Queens’, given both utilise cathedral sized organs and quasi brass horn type drones.

Packaging wise, the CD is housed in a beautifully presented in a large odd sized 8 panel fold out cardboard cover, the imagery of grey wintery mountain-scapes are a suitable visual representation.  With deft compositional skill Phragments have delivered an commendable orchestral dark ambient album.