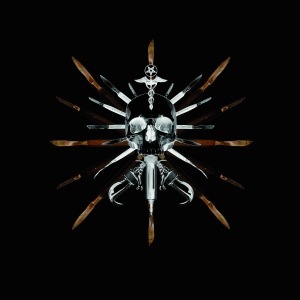 Steel Hook Prothesis (SHP) are by now a well established name in the US scene and are certainly recognisable for their darkly sinister atmospheres created via a twisted mixture of dark ambient, death industrial and power electronics.  ‘The Empirics Guild’ represents their first proper album since ‘Atrocitizer’ which was released in 2008.

‘Rendering Human Tallow’ opens the album with a horror soundtrack type vibe (aka a lone piano melody), but this is soon engulfed in a maelstrom of blasting distortion, which on closer attention is actually heavily processed vocals.  Thus within the space of the first few minutes the oppressive tone of the album is clearly and forcefully established.  Given SHP’s demonstrated skill in creating broodingly sinister soundscapes, here the tracks are loosely contracted into ‘movements’ rather than typical songs.  Likewise with their use of rasping and seething vocals which are heavily treated with scalpel sharp distortion, these have become are a particularly impressive trademark.  ‘Debrided Necrotic Tissue’ is noteworthy for its use of echo treated medical dialogue sample within a dark ambient guise, before shifting into sweeping distortion territory and completed with the trademark vocals.  Likewise the following track ‘Gula’ is impressive and pushes the tone up a notch with apocalyptic brass horn styled synth layers, metallic pounding rhythms, sweeping tonal noise and distortion flayed vocals.  Alternately late albums track ‘Disease Incubator’ allows slightly more breathing space with its lengthy excursion into sparse cavernous drone territory, whilst ‘The Blood Cough’ is reminiscent of the noisiest aspects of another highly regarded death industrial project Stratvm Terror.

Clearly the overarching mood of the album is heavy and morbid thanks to the dark ambient and death industrial elements, whilst the power electronics aspects provide a sonic counterpoint by being sharp and focused, but never overbearing within the sonic template.  Essentially ‘The Empirics Guild’ is clearly recognisable as the work of SHP, who have within their established template delivered an impressive addition to both their own and Malignant catalogues.