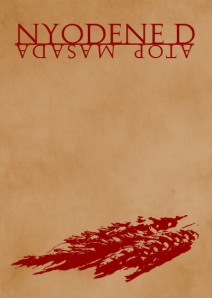 Nyodene D return following the well received ‘Edenfall’ album of last year (reviewed here), and as with their other releases ‘Atop Masada’ focuses on some interesting conceptual material.  More specifically this tape deals with the Roman Siege of Masada in 73/74 AD resulting in the mass suicide of the Jewish Sicarii (aka “dagger men”) population who has settled at the the fortress of Masada (located on an isolated mountain plateau in southern Israel).  More generally the Sicarii were an extremist splinter group seeking to expel the ruling Romans from the Roman controlled provence of Judea through violent insurgency tactics including publicly attacking Romans and Roman sympathisers with concealed daggers.  Beyond this micro history lesson the promo blurb more succinctly states: “Thematically, this release examines the nature of honor, sacrifice and extremism framed in the historical context of the Roman siege of Masada”.

Regarding its musical aspects the tape’s 30 minutes are split into two lengthy tracks, featuring one per side of the cassette.  ‘Grain To Ash’ spans side A and focuses on the multi-layered looped power electronics side of Nyodene D, where queasy cascading loops and burrowing distortion roll relentlessly on once established in their groove.  Vocals when they arrive hold a point of difference, as they are presented in a commanding half sung, half spoken drawl.  The second track ‘Sicarii’ differs somewhat, being slow and cavernous containing shrill ethnic tinged strings and catatonic and obliterating bass thump which coalesce as part of its expansive guise.  Later in the track synth textures provide a greater cinematic flavour, which is offset against shuddering industrial noise and squalling junk metal abuse.  As the track progresses it ramps up with increased intensity until the trademark heavy distorted and echo treated Nyodene D vocals make a welcome appearance.  Excellent stuff.

Being dense and heavy in production, yet containing a certain clarity to the sonics both tracks works well within their long form expansive guise.  Noting Nil By Mouth’s special attention to packaging, here two double sided printed colour inserts are included with the pro printed tape which are all housed in a small burlap sack.   Given its edition of a mere 130, this seems ludicrously limited for the quality of the material presented here.  As such you know what to do.