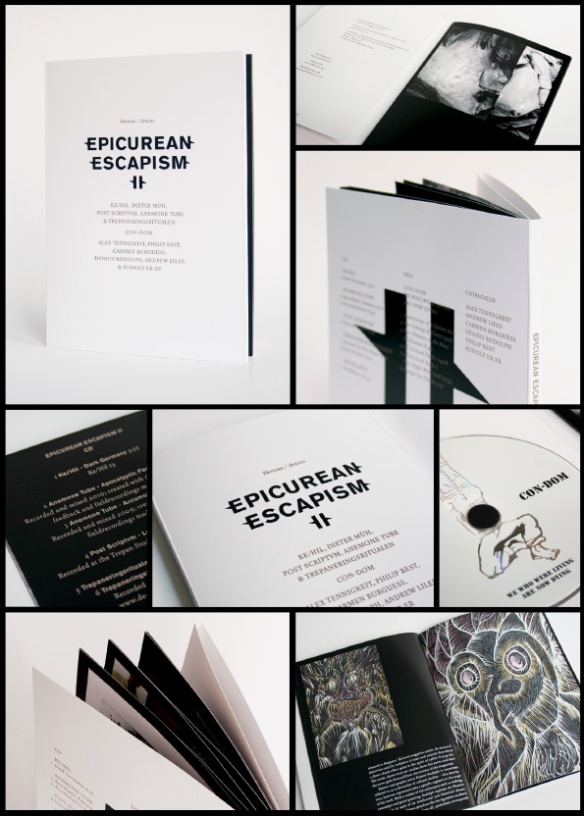 ‘Epicurean Escapism II’ forms the multi-media companion release to the festival of the same name (held in Berlin on 15th June, 2013).  Noting this is the second festival release, when reflecting on the cassette/ DVD/ special packaging of the first compilation, this time around the format has been stepped up a notch to more comprehensively reflect the multi-media format of the festival.  Here the release incorporates elements of all artistic aspects including: reproductions of a selection of exhibited artworks, a CD of material contributed by performing acts and a DVD that reproduces the screened short experimental films.  These audio and visual elements have then been housed in an impeccably designed DVD sized fold out cardboard cover, highlighting that there have been no half measures when approaching this release.

To address the musical content first and noting the musical heritage of Ke/Hil, their heavily ominous and coldly nihilistic track is a great way to open the CD.  ‘Dark Germany’ amounts to an expertly crafted and dense layered composition of slow throbbing synths, swirling noise and distortion frayed vocals.  Anemone Tube follow and deliver a pair a solid tracks (‘Apocalyptic Fantasy’ and ‘Accumulations’), which both adhere a general pattern of invasive cyclic noise, looped metallic clattered, managed/ barely recognisable field recordings and understated melancholic droning synth elements.  Each of these tracks (again) displays the particular sound attributable to Anemone Tube, which as I have said before is testament to the mastery of his sonic craft.  Moving on to ‘Leprous Driver’, Post Scriptvm evoke more filmic composition imbedded with an atmosphere brooding menace, here consisting of a slab of crystalline dark ambience (aka droning syths, spares piano notes, and unobtrusively layered background tones/ noise).  Following next is the mighty Trepaneringsritualen, who contribute two tracks on the shorter side (3 to 5 minutes each). ‘Vanärat Är Ditt Namn’ takes to a rhythmic song based approach of a repetitive throbbing beat and yelled verse/ chorus/ verse type vocals, while ‘End of Flesh’ opts for slow ritual ambience, where a catatonic bass throb provides some sense of structure amongst the layers of swirling vocal invocations.  To round out the compilation Dieter Müh issues forth the hefty 20 minute composition ‘Bethlehem’, which is a highlight amongst highlights.  Here the track commences with a beautifully understated modern classical tone, with distant melancholic piano and abstract vocal sample cut ups.  However this fragile segment ultimately acts as the intro passage for the main bulk of the tracks which features a mid paced, tribally infused dark ambience, which in some ways reminds of the early works of Morthound.  To provide a final comment on the compilation, to my mind if the curation of such releases is not managed correctly they can either become frustratingly long due to the number of contributions and/ or suffer from submission of poor or second rate material.  Thankfully no such complaints exist here, as with a (mere) seven excellent tracks by five artists, it is an easily digestible and most importantly an engaging and enjoyable listen throughout.

For the DVD segment of this release, this consists of six short films by Mike Dando of Con-Dom, issued under the collective title ‘We Who Were Living Are Now Dying’.  Whilst not constituting new material from Con-Dom, the DVD sees the formal publication of six archival experimental films that Con-Dom produced between 1983 to 1994.  Here these short films effectively act as the visual counterpart to a number of Con-Dom’s heavy and harsh power electronics tracks, and whilst relatively crude and experimental in style, they consist of filmed footage and still images which are cut together as a sprawling visual collage.  Conceptually there are a range of themes at play including: belief, religion, sin, spirituality, suffering, religious ecstasy, pornography, masturbation, sexual ecstasy, medical deformities, birth, death, race, racial hatred, family, honour, authority, war atrocities, crime etc.  With its cut up collage technique the multiple utilised themes are presented for the viewer to analyse and pick apart in trying to stitch together the conceptual threads on display.   Visually the films are quite dark and textured and which suits the material well, while there is also a faint black line flicker moving through the visuals.  This later aspect could be due to the material being filmed on video, or otherwise as a result of the transfer to digital format from super 8 film – but either way this effect adds to the lo-fi grainy aesthetic of the films.  As with Con-Dom’s more recognised musical outputs, there is always a clear message at the core of Mike’s work even if it gets somewhat muddied by the brute force approach.  As such it is great to see that a similar approach is embodied within Con-Dom’s experimental films, where it will take time to analyse presented content.

For the last part of this release it has sought to in part document the group art exhibition displayed as part of the festival (which incidentally was curated by African Paper Magazine).  Contributing artists whose artworks were featured from Alex Tenningkeit, Andrew Liles, Carmen Burguess, Dennis Rudolph and Phillip Best, Rudolf Eb.er, and whilst each artist’s outputs vary wildly in materials, style and aesthetic output they do generally hinge on a darker and/ or subversive tangents.  Here a selection of the artists works are published in a 16 page full colour booklet, along with an essay by Uwe Schneider which outlines the concept of the festival and compilation and neatly ties together the various artist’s inputs.

Although in the first instance this release is a memento of the festival it seeks to document, with its meticulous execution and sheer quality of its content, Epicurean Escapism II transcends this mere documentary role, to become an exceptionally focused multi-media release.  Definitely worthy of detailed investigation and limited to a mere 350 copies.