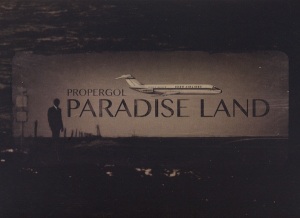 After dropping off the map following their sixth album ‘Ground Proximity Warning System’ way back in 2006, seemingly out of nowhere Propergol has made a rather welcome return.  In order to provide some necessary context for this new offering, over the course of their 16 year career Propergol have always articulated a certain filmic and cinematic quality to their sound.  However in the past this has been mainly due to the use of various movie dialogue samples scattered throughout their compositions.  Also given the heaviness and harshness of the earlier material was rooted in the merging of heavy industrial and power electronics, this new album has instead opted to elevate its production to a level which feels more as the product of a professional sound studio.  Thus this time around rather than just hinting at a cinematic sound through samples, ‘Paridise Land’ comes across very much as the backing audio track to various scenes of a nameless motion picture.  Here the production is deep and bass heavy, yet crystalline and clear, which adds a tonal heaviness to the sound which isn’t as reliant on harshness as earlier material was.

After a brief introductory piece (‘Running Scared’) the second track ‘911 Dispatcher’ presents a moody orchestral strings type of dark ambience (complete with scattered radio chatter), which clearly articulates the differing approach taken on ‘Paradise Land’.  Likewise although the following track ‘Ymene’ hints at the earlier approach of Propergol, here the sound is controlled with a tense and brooding heavy industrial sound, rather than being noisy and unhinged. ‘E.R.S’ is a great example of the merging of the old and new elements of Propergol by using a well placed dialogue sample (lifted from the ‘classic’ Hollywood era movie), as synth layers and scattered industrial debris creates an atmosphere which balances on a knife edge between the etherial and the ominous.  ‘Psycho Road’ is the track which comes closest to the harshness of earlier material (freeform scattered noise and wavering distortion), yet the digital crispness of the production clearly positions this in context of the balance of the album.  The following track ‘Escape From…’ reverts to calmer territory given it evokes a sweeping dark ambient soundscape, but keeps things on edge with a stalking bass pulse and tone of brooding menace.  Also worthy of a specific mention is late album track ‘Impossible Landing’, which is one of the most divergent tracks of the album, by virtue of being constructed with a programmed electronica beat, and moody synth textures which has far more in common with Atomine Elektrine than what Propergol would be typical recognised for.  That said, there is no complaint from these quarters as this an excellent understated electronica track. The album concludes with the mammoth 16 minute ‘Bleu Nuit’ which is the most experimental of the set, being a more abstract dark ambient/ electronica/ industrial cut up which moves through a number of somewhat disjointed segments and a myriad of dialogue samples.  Whilst not a bad track at all, it however lack the focus of the material which proceeds it, meaning the album does not finish as strongly as it otherwise might have.

Spanning just on 70 minutes, there is a lot of sonic texture and detail to take in.  Clearly some have lamented the lack of overt harshness here, which has in turn lead to accusations that Propergol have moved to an entirely dark ambient ‘lite’ version of their sound.  Whilst this is certainly not the Propergol of yesteryears, it is great to see a project so confidently forging a new era of sound via unexplored sonic territories and a wider sonic palate.