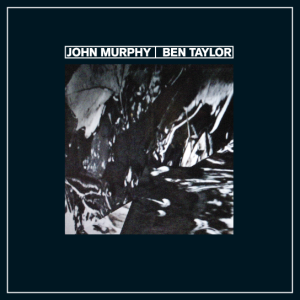 Here we have a collaborative album featuring the combined inputs of the known John Murphy (of Knifeladder, Kraang, Shining Vril and MANY others), and the likely lesser known Ben Taylor (of Ebola Disco & Bordel Militaire).  From the liner notes it also seems these recordings are already a number of years old (dating from 2004-2005), yet there is no indication of the reasons for its delayed release.  Nevertheless this album can be filed under a broad experimental industrial style, which also feels as if it has roots in an analogue, tape culture oriented sound.  Interestingly the conceptual content and focus of the release have been kept to a minimum (or purposefully excluded altogether), given the lack of project moniker, album title or even titles for individual tracks.  Clearly this means the material on display needs to be appreciated on sonic quality alone.

From the album’s opening untitled cut, which offers up slow oscillating and shimmering drones, it sets a slow meditative pace which continues into the following composition, albeit upping the tension slightly with a range of more forceful ‘industrialised’ sonic layers and scattered percussive sounds.  Track 4 then delivers an excellent example of a ritual ambient style, with a deeply cavernous sound production and low chanted vocal textures.  Alternately track 6 represents the noisier end of the scale for the album, where it edges towards an overblown style of cacophonous industrial / atmospheric noise, although does maintain some harmonious textures which are partially buried within the texturally dense mix.  Representing a particular album standout, track 9 with its ambient/ industrial tone, reminds of Anemone Tube’s recent outputs. Here the complex multi-layered track featuring some heavily processed field recordings, looped vocalisations and micro-tonal textures.  In the later third of the album, track 11 opts for a heavy ritual industrial sound based on catatonic bass thuds, shuddering electronics, ritual chimes and a series of garbled vocalisations.  Likewise although late album track 14 does not deviate heavily from the preceding tracks, it delivers an animated, droning industrial/ ambient piece, which bleeds into the final composition, being a shorter repetitive number based on slightly wonky and hallucinogenic toned loops.

From the liner notes the range of instruments used on the recording these include: ethnic instruments, pan-pipes, harmonica, theremin, tapes, processors, oscillators, pan-pipes, harmonica etc.  However as these represent source inputs and sound processing tools, seeking to identify individual instruments within the mix is ultimately a pointless task.  Yet in an overarching sense there is a ritual industrial quality to the album’s atmosphere, however this is arrived at from the perspective of tonal range and sound, rather than specific ritualised intent (…for comparative purposes the Aural Hypnox collective could be referenced as an example of where ritual forms a key aspect of their approach).  Also whilst some of the album’s passages clearly display an improvisational stylistic slant, this never descends into messy or out of control sound experimentations, rather articulates an unhurried pacing and clear control to these experimental compositions.

Of the 15 untitled album tracks, each spans around 3 and 7 minutes which results in an album which pushes the limit of the CD format (71 minutes in all), meaning a fair amount of sonic territory is covered under its chosen experimental industrial style.   Thus without attitude, ego or pretence, Mr Murphy and Mr Taylor have issued an album which delivers a solid slab of darkly (and occasionally noisy), experimental/ industrial meditations.