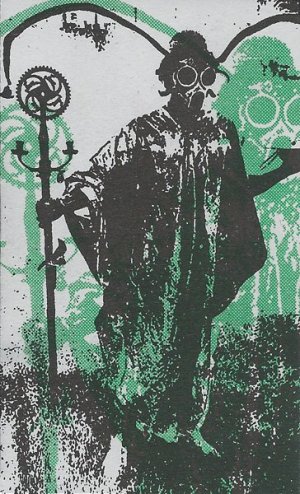 Although being familiar with the individual output of both projects, their two prior collaborations passed me by (being the ‘Sundsvalls Elit’ MC from 2006 and the ‘Furyfication’ LP from 2007), therefore I am quite not sure how this compares. Yet from sampling this cassette it would seem that Proiekt Hat’s involvement has tempered the longer form compositions typical of Alfarmania (as this tape is very much a collection of individual tracks), whilst also injecting a greater degree of stilted, mechanised structure.  Also interestingly it seems that apart from the three listed collaborations with Alfarmania, Proiekt Hat have been otherwise inactive, noting the last solo release was the ‘Make Sense’ MC from 2006.

Given that both acts are imbedded within a lo-fi analogue Swedish industrial noise/ power electronics cassette culture (aka – ‘post-mortem’ sound), the sound of each project compliments the other rather well. As such this tape is very much concerned with the presentation of reverb drenched analogue atmospheres and stilted caustic industrial rhythms (akin to malfunctioning conveyor belts and the like). Tracks are built upon a filthy bed of shuddering industrial debris, queasy wavering textures, random radio chatter, and general abandoned factory ambience, which is further cut through with wailing emergency sirens, drawling fog horns and other sonic clutter to generate a cold war ‘radiation fallout’ type ambience. The title track ‘Astral Slaktmask’ rates a mention, being a tense track of meat grinding mid-range frequencies, sweeping drones and sporadic industrial bass thump, which stretches out over an extended length. ‘Full Tank’ also elevates the mood through a more forceful composition of idling factory rhythms, crumbling noise and burrowing mid-range textures, and a blast furnace aesthetic typical of Alfarmania. Moving through a range of reverb drenched warehouse type atmospheres, post-apocalyptic soundscapes and passages of dark brooding death ambient intensity, the tape closes out with ‘Cut Felling II’, containing a queasy oscillating tone and distant machine gun blasting type distortion. Excellent stuff.

Given the apparent desire for both projects to remain obscured within the underground cassette culture (or failing that, total apathy on their part for underground ‘popularity’), ‘Austral Slaktmask’ function as another audio monument to the apparent ease with which Alfarmania and Proiekt Hat evoke rugged analogue industrial noise soundscapes which are heavily imbedded with sense of dread and unease.