Regardless, the opening album piece ‘Elberton 1979’ is a strong composition using booming brass horns (of hell) to evoke a martial industrial tinged dark ambient tone. This is quickly backed up with ‘Anti-clockwise Rotation’; a hallucinationary tinged, subdued rhythmic industrial meets dark ambient piece and within the context of these first two tracks it demonstrates Kristoffer to be skilled in writing dark musical compositions within the general ‘CMI sound’. The third offering then comes in the form of the amazing 9 minute ‘Row Me Over’, being part soundscape and part dark ambience. With a backing of outdoor field recordings (forest sounds, creaking oars, croaking crows etc.), these blend with desolate and melancholic sub-orchestral synth drones and low level microtonal cracking metallic textures for excellent tonal impact. This piece represents a ‘sonic tapestry’ of the highest order and specifically reminds of the desolate bleakness of raison d’etre’s classic album ‘within the depths of silence and phormations’. ‘Liquidator’ features as another industrial tinged dark ambient track, with rumbling echoed elements, noninvasive sweeping textures and muted semi-orchestral drones to create a track with a general soundscape sprawl. Late album track ‘The Sun Maker’ is slightly more forceful with its blend of various creaking and rhythmic tones with octave shifting dour sub-orchestral elements and violin synth pads to evoke an melancholic edge, and then steps up again on the final track ‘The Arch’ with a looped and churning sub-militant industrial structure, which is heavily process with bass reverb and undercurrent of creaking metallic elements.

Seemingly stepping out of the shadows of his other collaborative projects, Kristoffer Oustad will no doubt establish his solo prominence through this excellent industrial/ dark ambient album. Likewise with ‘Filth Haven’ being quintessentially ‘nordic’ and bleak in feel, it is a more than suitable continuation of the legacy set down by the CMI (and related) troop.

Am Not – Unpunished CD Unrest Productions 2015

Up until recently I had only been peripherally aware of the unusually named Am Not, but this totally changed upon the release of the promo track/ video for ‘Dark Heart Katanga’ in late 2014. The video coupled with the music functioned as a singular and direct demonstration of one the strongest newcomers to the UK industrial/ power electronics scene, and apart from the music being absolutely on point the accompanying video demonstrated an extremely focused thematic approach. Based on this track alone ‘Unpunished’ was a release I was very much looking forward to and after hearing it following its recent release it does not disappoint.

‘The Unpunished’ opens the album with a solid blending of programmed elements, mixed with a heavy dose of junk metal sounds and swirling distortion. Vocals are then presented in a direct spoken style, being mixed up front for clarity and impact, with this piece squarely demonstrating Am Not being able to cultivate an individual sound within a broader power electronics/ industrial/ heavy electronics framework. ‘Beware The Black Peril’ follows and sits more squarely within anthem style of pounding pulsing structure and focused flanged vocals and also nails this sound perfectly. Revving drones and overblown metallic distortion infuse for ferocious impact on the instrumental ‘Archangel Drone’, which is followed by the exceptional ‘Dark Heart Katanga’ – a track driven by fast paced heavy artillery rhythms (of fist pumping proportions), further underscored with sustained organ dirge drones and slightly treated but completely audible spoken vocals to create 7 minutes of structured PE anthemic perfection. The rougher distortion mangled vocals and static charged metallic pounding rhythmic approach on ‘The Hate That Dare Not Speak its Name’ also function to highlight the sonic diversity of Am Not’s approach. After the short and direct choppy distortion squall of ‘Extremophilia’ the album concludes with ‘Folie A Deux’; another track of direct pounding intensity and rough yelled and flange treated vocals (which reminds somewhat of the short lived Swedish project Iron Justice).

Rather than being vague or ambiguous in intent, all lyrics are published on the 6 panel, cleanly designed digi-pack, and illustrate an interesting ‘colonial’ thematic angle which has been taken to common themes of political and societal control. With the expert blending of clean and clinical programmed elements with rougher and more chaotic sound sources, ‘Unpunished’ is infused with a direct and focused approach. Far from being a mere copyist project with their debut album Am Not have built upon the foundations of power electronics and industrial and have twisted them into a sound of their own. Recommended.

Three years have already passed since the release of the exceptional ‘World Draped In A Camouflage’ album, where this new full length follows a similar approach bedded down on the last, i.e. by featuring a collection of individual and uncompromising tracks; each displaying a clear diversity of approach within a general industrial / noise / power electronics framework.

The opening cut ‘Black Flag’ commences the album in unhinged fashion with swirling/ grinding layered noise, sporadic junk metal sounds and harsher static elements as the screeched / distorted vocals yell the track’s title (sampled operatic vocals are also used but barely discernible and only becoming apparent after a number of listens). This is followed by the early album standout ‘Ghosts of Old Europe’, being based on a basic structure of sustaining buzzing tone and background lurching loops, further augmented with a heady dose of metallic clangs and distant wailed vocals.  Additionally semi-buried droning abstract strings add a melancholic tone, as Mikko’s prominent trademark gruff yelled and slightly treated vocals provide a level of raw aggression. ‘Interrogation Paranoia’ then shifts the mood toward more noisier realms, based on its spitting and sustained frequencies (mid to higher piecing tonal range), whilst the vocals are more antagonistically accusing in their delivery. ‘Linkola Legacy’ arrives as the most divergent track of the album, based around a fractured and partly rhythmic tone, sounding like a switch being flicked between different noise generator settings. Wet and squelching sounding static infused loops feature as the backing for ‘Unmarked Graves’, which is then pushed into noisy chaotic realms with further layers of distortion and rough barked vocals. ‘Ordeal of Water’ is based around a core of junk metal abuse and as a consequence is loose and chaotic, where the vocals relegated to gurgled and pain inflected screams which do not seem to be articulating any actual words. The title track is another clear standout, with sustained mid toned distortion and revving noise loops, as an underpinning accordion drone provides a dour edge to the track’s mood. A low cyclic noise drone commences ‘Saws Are Waiting’, but evolves in the latter half to contains a rather fist pumping and anthemic PE quality, due to its strong militant rhythmic loop and (again) trademark wailed vocals of Mikko (junk metal clatter also makes a late track appearance).

Focused and forceful, each of the 10 tracks are perfectly controlled, again being an absolute demonstration of Mikko’s mastery of his honed sound. This stands as a testament to his ability to construct varied and distinct PE compositions which never forsakes a gritty industrial and noise infused underground aesthetic. Given its individual track based approach this quite feels like the brother/ companion album to ‘World Draped In A Camouflage’, although it does not achieve the same level of immediate impact, rather is more of a slow burner in revealing it true character.  Regardless, ‘Myth of Blood’ is another extremely strong addition to Grunt’s catalogue. 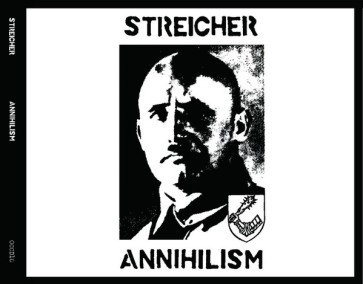 Over the last few years the influence and dare I say it cult of Streicher seems to have been perceptibly rising, thanks in part to the re-release campaign spearheaded by the Freak Animal side label Industrial Recollections, but most importantly due to the distinctive sound that Ulex Xane cultivated as part of his power electronics aka ‘Oi! Noise’ project. Although Industrial Recollections previously issued a compilation CD in 2009 with all of the ‘Annihilism’ tracks (in addition to other rare pieces), here Old Captain has re-issued ‘Annihilism’ as a 20th anniversary edition, with revised and updated artwork courtesy of Marco Deplano.

The music itself comes from the early recording period (1989 to 1991 but not released until 1995), with the philosophy of the project neatly wrapped up in the “Annihilism” title. Yet if the implied meaning of the album title was somehow missed, the opening spoken word piece leaves no opportunity for confusion about what the group stands for (…and surely the heavily accented spoken female voice only adds to the strange allure of Streicher for non-Australians). It is then of interest that Streicher’s ongoing legacy and influence can be distinctly heard on tracks such as: ‘Rectify or Cease’, ‘Mutilation Victim’, ‘Decomposed Whore’ and ‘Destroy You Motherfuckers’. Noting that time and age have not wearied the force of these pieces, direct linage can be drawn from muffled mechanical churn, chaotic distortion and general industrial unease of these tracks to the likes of Alfarmania and similar ilk. Equally tracks such as ‘Nothing Has Any Meaning’ and ‘I Don’t Give a Fuck’ function to deliver a hammer blow of Streicher’s crude power electronics complete with the harsh and growled vocal barrage of Ulex, although comparatively speaking these pieces do not stand up as well today and perhaps now lack the direct impact they may have had some decades ago. ‘Nullify/ Obit’ stands out substantially from the rest, given it is a spoken word passage read over a classical music backing, whilst the album concludes with the short but excellent ‘Parade Fascisti’; a sullen track of stoic rolling martial drums which fade into silence before one last vocal barrage attack.

Given that it is great to have ‘Annihilism’ more widely available again, it is a shame that the label has chosen to press the digi-pack in rather flimsy cardboard stock which is prone to easy denting and marking. Although a minor gripe this re-release deserved better.

Not to be one to rest on legacy alone, Ulex Xane over the years has issued a large volume of material under a variety of guises. Kulmhof appears to be the latest adopted moniker which functions in general Streicher territory, albeit featuring a slightly updated, louder and less muffled sound. With this being the debut release, although uncredited to an actual label it has been released by ‘Major Carew’ – a pseudonym of a UK underground artist.

‘Sterilization of Species’ is the first piece: an instrumental track of granulated distortion, buzzing tonality and vaguely agitated mechanised loops/ rhythms, with a sound that the rough and suitably loud. Sitting squarely on the power electronics/ industrial rather than harsh noise side of the fence and with little to no variation or evolution, this track is caustic and invasive in the best way possible. ‘Mémoires Retards’ on Side B is a differing affair, based on a subdued, slightly fractured pulsing/ rhythmic loop where added layers push into churning distorted territory over its length, yet still remain subdued compared to Side A.

With a total run time of nearly 20 minutes, Kulmhof is a clear display of the fact that time has not cowed Ulex from producing harsh and direct power electronics/ industrial material. The pro-duplicated tape and colour cover appear to be intentionally lurid in design (fluro green tape) with quote on the cover from Jean Baudrillard giving a hint at thematic preoccupations (perception of reality and its ‘reproduction’), despite being entirely instrumental. An obscurity worth tracking down, with further details for ordering available via: majorcarew@hotmail.com