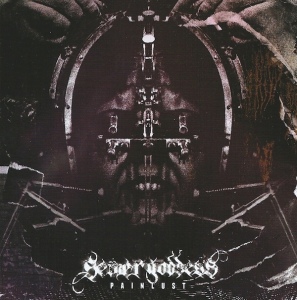 Since 2006 the Boston native Sewer Goddess (helmed by Kirsten Rose) has been delivering her particular brand of death industrial muck which on occasion verges on power electronics aggression. ‘Painlust’ is the new opus (and second album if not counting the live album ‘Disciples Of Shit: Live Waste’ from 2001), and a surprising one at that given it demonstrates a substantial evolution in sound. Essentially there has been a intentional streamlining and refinement of the project into a formal band structure (now including bass, drums and guitars), but not forsaking the grit and grime of the tone of earlier material.

‘Plague Axis’ open the album with a crushing death industrial sound; one of creaking metal, sustained minor key drones, pounding beat and screeched vocals to set the tone with grim intent. The following piece ‘My Grave’ the arrives as the first demonstration of the shift towards a structured ‘band’ focus, where the death industrial sound is augmented with slow pummelling Godflesh styled industrial styled guitars (albeit of a darker doom metal heaviness), here with Kristian’s vocals being in a distinctive drawled spoken style. ‘Flog’ follows a similar template of a mid-paced churn of guitar/ drums/ bass but here the drawled vocals are force-fed through a distortion treatment, with this track being a fantastic display of the evolved band driven approach. ‘Black Meat And Bones‘ is a song of a more forceful ilk, with a driving/ pounding percussive backbone, spitting machinery, screeched vocals and austere but shrill guitars, while the slow rhythmic drag and pull of the bass/ drums/ guitar of ‘Get the Rope’ achieves a very death industrial feel, despite its more typical band formation. Representing a grand conclusion ‘Melena’s Mask’ pushes back towards a mid-paced industrial guitar throb, heaving driving percussion and rhythmic machine backing, here Kristen’s vocals being multi-tracked to included drawled passages and screeched screams.

With 6 tracks at around 28 minutes, this is by no means a long album, but has compressed a massive sound into this short timeframe. The album artwork by André Coelho Sektor 304 is suitably grim and mechanical in style, although to my mind some of other images within the booklet would have made for a more striking cover. Noting I have appreciated what Sewer Goddess were about on earlier releases, ‘Painlust’ is a quantum leap forward in style and sound with the honed band focused sound a real revelation to behold.