Climax Denial are an American project whom I have only heard one early album – 2010’s ‘All My Loves Are Like Dreams’.  Although not having revisited that album for a long while, at the time I remember giving it quite a few spins but without it really grabbing or engaging me in a positive way.  So given this rather nondescript impression of the project (coupled with the large number of releases already issued since 2005), it sort of feels like I am checking out this group for the first time (…again).  But after giving this new a proper and focused listen, frankly I am not sure where my mind was at previously given this album is a complex, controlled and highly engaging listen.  Here 4 lengthy tracks are presented (between 9 and 14 minutes each), featuring forceful industrial drone-scapes to subdued power electronics, where on occasion Stratvm Terror is a perhaps a suitable marker of how this album straddles aspects of industrial and power electronics in a loose but controlled manner.

With its controlled pacing, and the impressions derived from song titles and artwork, there is a real feeling of a physiological narrative; somewhere between confessional and voyeuristic (…perhaps metaphorically described as a display of someone unburdening themselves via a confession, but equally reveling in the reaction the confession creates).  So whilst sonically this album makes for a great listen, it also is embedded with a sense of a strong thematic undertone which provides an edge of being more than mere sound alone.

The rather enigmatic and elusive Proiekt Hat return to the cult Italian label Xn Recordings, 10 years after the ‘X’ cassette from 2005.  Without too much fanfare ‘XX’ is a continuing journey into Proiekt Hat’s world of muted industrial/ post-mortem soundscapes. Yet before getting to the content of the tape, the packaging is worthy of a mention, featuring a perfectly sized, solid aluminum case to house the chrome tape.  A collector fetishist’s delight.

The tape opens with ‘Worthless Stride’ where the listener is immediately thrown headlong into a piece of effective ‘non-movement’ and subdued mechanical stasis, where the following cut ‘Permaclock’ is more varied and focused with its wonky loops, distant bomb blasts and dive-bombing atonal synth notes.  With the first side of the tape featuring only 3 tracks, the final rather lengthy 10 minute piece is ‘Sentence Without End’. Being based on multilayered bass addled loops, queasy analogue atmospherics and depth sounder tones, the well placed samples deal with the nature of reality, illusion and truth.  Noting its paranoid infused tone the track gradually builds to a heavy cascading conclusion, resulting in a particular highlight of the tape.

For the second side it features 5 shorter tracks, which do not allow for the same full immersion that the longer compositions on side A provide.  ‘Deadwave’ and ‘Heatcycle’ display similar traits of dank and melancholically tinges loops and corrosive atmospheres, where a suitable degree of layering achieves intertwining complexity, where ‘Heatcycle’ also presents a sound which is as close as Proiekt Hat have got to emulating a classic approach to Swedish death industrial.  The next pairing of ‘Steamscatterer’ and ‘Tomorrow Never Was’ also display tonal similarities, featuring spitting static, crude loop manipulations and general synth modulations, although on the later the sound is very basic and rudimentary and simply lacks the sense of industrial analogue unease which is customary of Proiekt Hat. Rectifying this filler misstep, the last track ‘Final Broadcast’ delivers cavernous sound of distinct warbling synths and muffled/ echoes pounding structures, with pitch shifted sound layers for further disorientating effect.

For anyone who has listened to any of Poiekt Hat’s sound arsenal to date, there is a certain style and approach which is again reflected on this recording.  On this front Proiekt Hat seem to forgo any overt attempt at an evolution of the project’s sound, rather seems entirely content in exploring the dark recesses of a particular ‘post-mortem’ sonic furrow and broadly generating a discography of inertia in the process.  Clearly you will already know if Proiekt Hat’s output if you and if having not secured one of the 186 issued tapes, no doubt the search will have already begun. 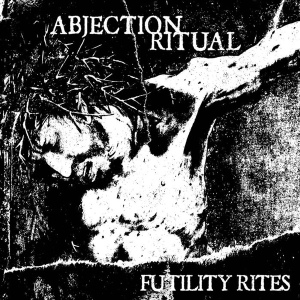 With two self released CDr’s under their belt from 2014 and 2015 respectively, Abjection Ritual proved themselves to be an extremely strong and focused newcomer to the current crop of American death industrial projects (…think Steel Hook Prosthesis, Gnawed, the Vomit Arsonist etc.).  Obviously Malignant Records noted this too; whom have signed and now issued their formal debut.  But if any negatives were to be leveled at the earlier self-released CDr’s, their rather basic and rudimentary packaging and graphic presentation was not quite fitting for the caliber of the music.  Thankfully those failings in design and presentation have been fully rectified here.

As mentioned Abjection Ritual sound typically American in its death industrial styling, which in turn is sound which has built upon the foundations set down by the classic Swedish groups such as Archon Satani, Megaptera, Brighter Death Now etc. As such ‘Futility Rites’ delivers a veritable orchestra of factory/ warehouse based sounds which are roughly hewn into rhythmic and vaguely song-like form. Thus in a tonally capacity buzzing frequencies, shredded vocals, needling tones, and slow and steady bass toned thumps are on offer in varying compositional structures.  Wielding such elements to develop slow to mid paced offerings, they are then augmented with well-placed ‘hellfire and damnation’ religious focused samples.

Early album track ‘Barren’ hits the mark in stalking fashion; featuring a grinding mechanical underbelly and fissures of erupting steam, as the layered vocals make proclamations of wrath, angst and pain.  The excellent and atmospherically ominous ‘Scum Immersion’ opts for rusted steel scraping on concrete sounds which are wrapped up in a deep mine shaft/ bomb shelter type ambience, whilst the jagged distortion of the vocals are not much more than another shredded sound layer. The title track then features as most forceful of the 8 album tracks, being a machinery like rhythmically pounding/ driving piece with sub-orchestral bass focused synths, and further completed with the tormented vocals.  The final track ‘Tabernacle of Teeth and Tongue’ is as amazing as the title suggestions, here using as base of crumbling static, collapsing walls of metallic debris and layered noise filth, with the distortion flayed vocals towards the end verging on a black metal choked rasp.

Hitting many of the hallmarks of a classic death industrial sound, but also updating them with a more focused and harsher current American slant, Abjection Ritual have with seeming ease elevated themselves to a pinnacle level within the scene.  Without question ‘Futility Rites’ a highly focused and expertly crafted album by an artist that feels perfectly at home on the Malignant Records roster. 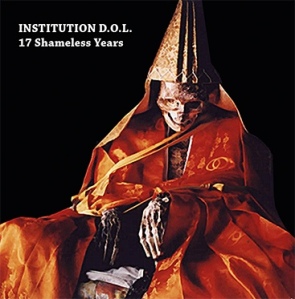 Although being previously aware of the project by name, this is my first introduction to their actual music and with this album representing the project’s reactivation, it is a good a time to become acquainted. In then taking a cursory overview of their back catalogue, 5 earlier albums were released between 2000 and 2007: however when contemplating their chosen titles, they hardly fill me with confidence as to what type of material and attitude they might encompass (i.e ‘(Cultural) Death By Consumism / Die Macht’, ‘Diskotheka Dekadenza’, ‘With Her I Had Some Tropical Feelings’, ‘Eleven Anticlerical Supersongs’ and ‘Instructions For Modern Weakniks’). Yet given this review is not about focusing on the past, at least ’17 Shameless Years’ seems to displays a degree of seriousness not previously evident.  From a further interrogation of the liner notes it also revels this not a brand new album rather constitutes a collection of 6 new tracks which are interspersed between radically reworked versions of 11 older pieces, whilst highlighting that main member Barbie B Dot has been assisted by MK Vermin (whom herself is part of Magadan).

To cut straight to the chase: this is an album which will specifically attract fans of an archetype European power electronic to industrial and heavy electronics sound, whilst also displaying a few experimental quirks and sporadic appearances of neo-classical, dark ambient and martial percussive elements.  Although in the most part the music is sonically loud, harsh and abrasive, there is also a ‘cleanness’ to the tonal palate and a meticulous layering of sound elements (as opposed to being crude and loose in delivery). To then throw in a comparative marker of where this album socially sits, later day Ex.Order certainly comes to mind during more than a few moments.

‘With Burning Heart’ functions as the opening track and bodes rather well for a solid album, being bleakly oppressive in the best way possible.  Here a short choir chant introduces the piece before the sound hones in on a direct and focused buzzing heavy electronics attack built around a militant rhythmic underpinning and apathetic, distortion treated vocals courtesy of MK Vermin.  Despite the rather appalling track title of ‘Very Vicious’ (which is only excused as it is contextually derived from the utilized sample), it is actually an excellent ‘classic’ toned industrial/ power electronics track. Here nauseous oscillating distortion, scolding static blasts and semi-buried religious focused sample function in a simple, direct and absolutely effective manner.  Noting that selected tracks skirt dark ambient territory (such as ‘Moral Conflagration’ with sparse soundscape, thudding beat, choir samples and whispered/ agonised vocals); yet others are more left-field experimental offerings (such as ‘Plastic Society’ with its sparse glitchy rhythms and treated spoken ‘industrialised’ vocals).  Late album cut ‘Daydreams All Ablaze’ is a further step apart with its martial industrial/ neo-classical type song format, featuring rousing orchestral synth pads, air-raid sirens and ‘call to arms’ type speech sample.  However apart from these singularly placed compositional diversions, the album’s broader attention is squarely focused on industrial/ power electronics / heavy electronics sounds.  This is clearly evidenced through tracks like ‘Unforeseen Annihilation’ which feature a focused bout heavy electronics, whilst ‘The Deceased Mind’ ramps up into barely restrained power electronics violence. Following a similar stylistic pattern the album concludes with a pair of tracks ‘Universal Peace’ and ‘The Last Rearing Up’ which focus on direct power electronics and sweeping heavy electronics respectively.

Given the degree of stylistic divergences between tracks, the album comes across as a collection of individual songs, which is obviously the byproduct of the methods in which the album was constructed (i.e. reworked older material in combination with new material).  Although this results in a slight lack of overall coherence, this is only a small gripe given ’17 Shameless Years’ represents an enjoyable collection of industrial/ heavy electronics/ power electronics focused material.  Given that it is understood that a new album is already the works, it will be interesting to see how it plays out in terms of theme, scope and overall coherence, but in the meantime this is an agreeable album in its chosen styles.