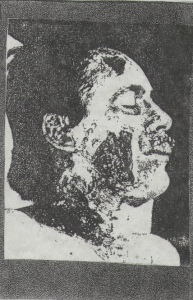 Luke Holland of Amour Group and Mshing, (as well as being the label boss of Trapdoor Tapes), has opted to use his own name for this solo effort.   Being more subdued than his other works, this tape features industrialised dark ambient drones.  Seemingly the product of analogue synths and assorted equipment, the sound is befittingly rough to suit the tape format and photocopied styled art.

‘Decomposition 1’ takes up the first side of the tape and features tensile, elongated, industrial tinged drones with a sustained tonality and shimmering high-toned textures, which abruptly cuts out at the end of the tape.  ‘Decomposition 2’ follows a similar stylistic arc, but the tonality is more subdued and mid-toned, with what appear to be quasi-orchestral sustained synth notes mixed with a decent dose of crackle and hiss for rough textural quality.  Mid track it abruptly cuts from one segment to the next to feature a singular subdued oscillation coupled with sporadic static manipulations and gradually elevating rough distortion and drawling bass tone.

Overall the compositional approach on display could be viewed as being relatively uncomplicated and straightforward for this type of material, all the same it makes for suitably enjoyable listening, particularly given its analogue means of production and presentation on tape format.