The first tape for review sees two obscure Australian projects Mshing and Sentenced to Life team up to each take a side of the tape each.  Mshing is the solo project of Luke Holland (also of Armour Group) and delivers a live recording or as it is referenced on the cover ‘Live Assault 2015/2013’.  Commencing with a cyclic death industrial throb it hits an early groove, but then moves into more obscure grinding noise industrial territory with semi-buried samples and gruff vocalizations. While the track is decent enough, with the distant muffled sound of the recording it only serves to hint at the actual live performance/s being of far greater volume and sonic impact.  Sentenced for Life take up the flip side, with the single track ‘Despertar De La Bestia’ and presents an atmospheric ‘post-mortem’ soundscape of muffled layered analogue filth.  Featuring a broadly cyclic approach, there is an interweaving interplay between the layered elements which generates an excellent complexity of rumbling industrial distortion, revving drones, distant sirens, cavernous clatter and indistinguishable voices.  This is both a strong track and the highlight of this tape given its murky and immersive qualities.

On the ‘Stir’ MC, Luke Holland goes it alone (again) but here functioning under his own name.  Compared to the last solo tape ‘Decomposition’, this time around he has taken a rougher, a more caustic industrial-noise approach.  With the single 16 minute track (repeating on both side), the squalling mid to high pitched chaotic noise is coupled with a deluge of dialogue samples.  Featuring a sense of improvised urgency the samples are then taken from Australian 1980s film ‘Stir’, referencing prison life, outsider attitude and cut throat violence. Some ritualistic clanging elements change up the sound mid piece to offset the more intense and sustained background distortion, while the piece bleeds out into looser, scattered abstract across the last section before abruptly cutting out.  Noting the driving urgency this tape of greater impact that than the ‘Decomposition’ recording.

Lastly, the World of Life Church SS tape features 5 untitled tracks in all, the first track being driven by a direct militant industrial ‘beat’, around which scattered noise and distortion interweave, all capped off with barked/ spat distorted vocals.  Rough and direct it is an excellent opening, while later tracks are broadly looser and more chaotic in their rough analog approach: essentially charting a course in a broad spheres relating to scattered noise-industrial to overblown power electronics squall.  With a sound which is a perfect fit for the obscure sounds Trapdoor Tapes is known, this delivers strong results, although admittedly it sounds more like a solo or duo project, than otherwise might be expected from a project featuring 4 members. 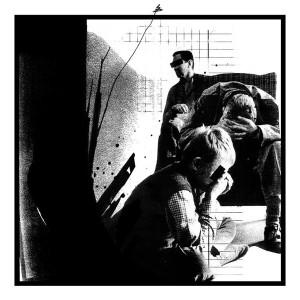 With Trepaneringsritualen now being a widely recognized name within the industrial underground, prior to the launch of that project in 2008 sole member Thomas Martin Ekelund recorded under another style and moniker, namely Dead Letters Spell Out Dead Words (‘Dead Letters’ for short).  With Dead Letters being broadly bracketed under the genres of drone and dark ambient, the music is also more musical than those genre classifications might imply.  As for ‘No Words’ it a re-release of a 2010 tape featuring 3 lengthy tracks, which span an album’s worth of material (43 minutes).

On the musical front although being sonically lighter than the rather imposing ritual death industrial works of Trepaneringsritualen, conversely Dead Letters can be considered as being emotionally heavier than Thomas’ current project.  As such there is a real sense of melancholy and emotional desolation which weaves through the music, and which draws the listener deep within the confines of its depressive atmosphere.

The first side of the vinyl bring two separate 10 minute tracks under the same title of ‘No Words’.  Based on their combined title, these pieces are obviously instrumental, where the first track features a spartan (clean) guitar tune, with plodding bass and sparse, tonally shimmering dark ambient undercurrent. With an almost ambient ‘post-rock’ edge, the sense of melancholy and desolation is far greater than typical music of that genre, but mid track the mood builds to a sort of doom addled synth based crescendo.  The second track on Side A ebbs forward at a crawling pace as gradual drone layers are added, where later a layered drone guitars evoking a bittersweet melody of doom creeps into frame (…”crushingly uplifting” might be suitable oxymoron to use).  Side B delivers the single LP sided track ‘Forgive/ Forget/ Regret’, which spans 23 minutes.  Commencing very much as a sparse doom-drone track, of atonal bass thuds, it catatonically builds upon a sparse undercurrent of shifting ice like static.  Well into the second half a miserably depressing guitar line emerges into frame, along with a slow cyclic rhythmic pulse, and melodic synths to give a greater sense of song structure and movement, which continues through to the conclusion of the piece. Desperately and depressively sublime….

Given that Dead Letters back catalogue has in some way been overshadowed by Trepaneringsritualen, Cloister Recordings US should be commended for digging this release for a vinyl reissue treatment.  On the visual front the artwork visually articulates the emotional desolation found within, whilst the mastering courtesy of James Plotkin has perfectly polished the musical content for a new audience.  Being almost needless to say, this is a great release.

Following the epic 2 x CD ‘Case 1959’ from 2015 (reviewed here), Jarl returns in 2016 with a single CD featuring one track at 56 minutes in length. On the thematic front, Jarl has conceptual moved from ‘external’ influencing concepts, to matters of the ‘interior’ and I quote: “electronic and acoustic sounds for the processing of memory, decision-making, and emotional reactions. For the left sides of Amygdala”.*  With this thematic underpinning, the use of concepts in dark ambient music warrants comment given it provides a ‘thinking’ element to latch on to when listening.  This has been positively demonstrated on recent Jarl albums, where there has been a strong thematic underpinning for each, even if ‘technically’ speaking the sonics do not vary widely between albums. Yet in such examples as Jarl, personally I see the use of theme as a bonus, by constituting an ‘idea’ to contemplate and turn over in one’s mind when listening to the album.

But with all that is said on use of themes above, even if you were to ignore any conceptual trappings, the music here can stand on its own as an immersive and contemplative experience.  Likewise by now with the number of albums released under the Jarl banner, there is likely to be a general appreciation of what is to be expected – and that being an album of minimalist dark ambient soundscapes and slow morphing sonics which balances on an edge between the clinical and darkly tinged.  Given the single lengthy composition an elongated approach has again been adopted, which by very nature slowly evolves throughout.  Clinical, multi-layered drones ebb and flow, where there is a refined level of attention to sonic detail (…given then is upwards of half a dozen individually discernible layers at any one time).  Essentially it amounts to tonal soundscape constructed around shimmering drones, pulsing/ throbbing elements and other various textural layers are constantly shifting, intertwining and evolving (…and on occasion partially replicating discordant orchestral strings).  Tonally deep and ‘hollow’, there is also a bulk, thickness and clarity to the production, which again provides an enveloping listen (…and particularly so when listening to this through headphones).

As with all of Jarl’s output I have heard, I certainly enjoy the experience, although I would be hard pressed to say this is comparatively better (…or worse?) than anything else I have heard from the project.  So if you know and like Jarl based on previous output, this will deliver an expected and enjoyable listen, yet equally, if Jarl is simply not known, this is as good a place to start.  Finally the mini-gatefold cardboard cover, with photography by Karolina Urbaniak is suitably abstract to suit the soundscapes found within.

* – The ‘amygdala’ is an almond-shape set of neurons located deep in the brain’s medial temporal lobe, which play a key role in the processing of emotions, and linked to fear and pleasure responses.  In humans and other animals its size correlates with aggressive behavior across species, and in humans has been noted to shrink by more than 30% in males upon castration.  Conditions such as anxiety, autism, depression, post-traumatic stress disorder, and phobias are also suspected of being linked to abnormal functioning of the amygdala. 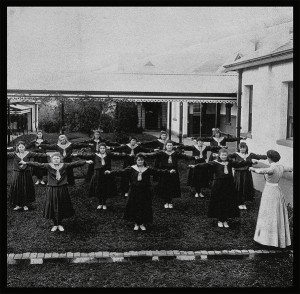 There is little room to avoid the fact that the release of this record in late October, 2015 was overshadowed by the untimely passing of core project member John Murphy on 11 October, 2015.  Yet conversely the album now functions as a fitting tribute to John, as an ardent underground figure who never abandoned his personal drive for musical expression within industrial and experimental musical spheres.  Whilst this album is technically not a new studio recording (it is the result of a live recording from 2011), you would never guess this from the sound alone, as there production is clean and clear and there is no background crowd noise (…perhaps being removed from the mix when undergoing mastering by luminary James Plotkin).  The fact that the live set also consisted of exclusive and up until now unreleased material, further sets it apart from a ‘typical’ live recording.

When contemplating the diversity and refinement of material found on the ‘Towers of Silence’ LP from 2014 (reviewed here), the music on ‘Snowdrops from a Curate’s Garden’ (name borrowed from the title of an Aleister Crowley book), has a more direct and consistent approach, which is slightly rougher and looser in execution (…thereby reflecting the live nature of the recording).  Thus across the 8 tracks (…40 minute approx. play time), there is definite singularity to its style and sound, which is evidenced through the use of weird tonal vocal treatments, where spoken/ chanted vocals (or vocal samples?) and mangled into a garbled and schizophrenic ‘hearing voices’ type style.  It also broadly contains that particular disorientating and ‘wonky’ 1980’s industrial sound which Last Dominion Lost have made their own.  Swirling miasma of dissociative and disorienting electronics, metallic derived clatter, industrial/ ritual/ martial percussion and the aforementioned vocals intermingle into an (abstract) industrial sonic soup.  Cascading avalanche of loose militant to ritualized percussive and metallic textures also feature alongside twisting and morphing analog electronics. Very much with its basis in a classic industrial frame of reference, there is also clear nods to ritual aesthetics with the wailing ritual horns and driving percussion.

Although I initially assumed ‘Snowdrops from a Curate’s Garden’ might be Last Dominion Lost’s swansong release, this is not the case.  Evidently the other core project member Jon Evans and Julian Percy have now been joined by earlier guest collaborator Till Brüggemann and have decided to forge ahead, where work on the new album has commenced.  Given that John’s sonic contributions hold a very strong influence over Last Dominion Lost’s sound (and in particular with reference to his twisted analog electronics and distinctive percussive style), it will be intriguing to hear what the new album with his absence will bring.  But for now, ‘Snowdrops from a Curate’s Garden’ stands as a fitting celebration of John Murphy’s dedication to the industrial underground.