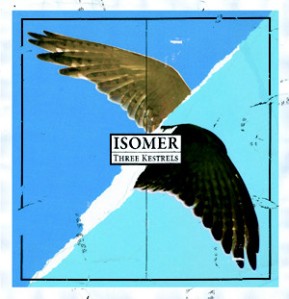 Over a span of 15 years David Tonkin aka Isomer has generated quite varied output within the broader post-industrial underground, which has resulted from a shift in the methods of recording and production.  Of the greatest influence in the process has been the move away from the use of computers during the early days, towards the current era relying on analogue synths and individually generated sonic inputs (noise equipment, found sounds etc). Noting also that Isomer was silent between 2011 and 2015, during this period David focused on his side project Rope Society, which saw him expanded his sonic palate to rougher industrial/ junk metal/ noise, which in part has now bled back into his main project.

To talk of the new album ‘Three Kestrels’ comes 5 years on from the ‘Nil By Mouth’ EP, which itself was released to coincide with a live performance at a Tesco Organisation related festival in Germany at the time.  Given this EP included heavy inspiration from and homage to a ‘German’ power electronics sound, ‘Three Kestrels’ is a logical continuation of that sound, but perhaps oriented along a more restrained and stalking approach which also draws upon elements of heavy electronics and death industrial styles.  From this perspective the opening cut ‘Mourn’ is an excellent example of a sound which sits at a midpoint between such genres traits, featuring rough elongated drones and crumbling industrial noise with a melancholic edge, where the treated vocals are also a standout element.  The following ‘No Reply’ is slightly more in a ‘classic’ power electronics vein which mixes a queasy/ throbbing synth and rough squalling distortion, where the utilised dialogue samples counterpoints the track’s title against the apparent faithful issuing their prayers.  Then in shifting gears down a notch, ‘Basic Terrain Data’ encompasses a death industrial tone of associating drones and bass throbbing rhythms and micro-tonal textures as the dialogue samples articulates scenarios of societal unrest and violence.  ‘Gods and Men’ rounds out Side A with a solid example of crude industrial rumble and static featuring a thick, bass driven morass and junk metal clatter/ barked vocals.

Moving on to Side B, ‘Induction’ reminds of the stasis based approach of Proiekt Hat, where the repetitive throbbing loops and rumble sets the scene for a prison based dialogue sample which outlines various systems and processes within within a prison complex, yet ultimately functions to outline a nightmare of banal incarcerated boredom.  Yet even with this implied negativity, the track manages to engender a ray of hope through a lone voice advising that there is nothing wrong with feeling suicidal, but not to give up as you never know how far away success is.  With its sustained drone, modulating textures and dour melody ‘730’ feels as if a bridging piece to the concluding title track which is another clear standout to these ears (as with the album opener).  Framed around a base a modulating synth rumbles, the distant and distortion scarred roared vocals (although unintelligible) articles a strong and emotive edge, with their emotional impact further increased through the sustained, minor keyed melody cutting a strong melancholic tone.

In a discographic sense ‘Three Kestrels’ is perhaps David’s strongest and most well rounded release.  Likewise with its focus on rough heavy electronics and subdued power electronics, it is such that it sonically warrants and benefits from its vinyl pressing.  Apart from the greater bulk of material pushing towards a sharper and aggressive tones, it is of note that a mournful and melancholic thread underscores the album.  This more emotive edge seems to be clearly rooted in some significant personal upheavals David and his family have been working through during the period in which this album was recorded, which only adds to the depth and impact of its final result.   A great album.