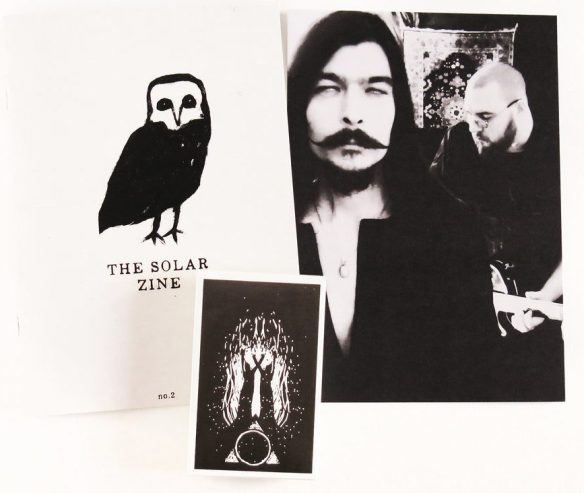 Although I have not previously come across Hypnagoga Press, they are a small independent Swedish record label and publishing house, being run by siblings Pär and Åsa Boström as an outlet for their own creative works (…and close affiliates).  This particular release combines a cassette by Altarmang, which is only available with issue No.2 of The Solar Zine.

To speak of The Solar Zone No.2, this constitutes a small 20 page A5 ‘booklet’ printed on textured card stock and features: a number of brief interviews; details of future publishing plan/ music releases; obscure artworks; images of winter landscapes etc.  An interview with Kenneth Hansson and Pär Boström of Altarmang then functions to highlight the recording process employed on the ‘Void’ tape; while the short interview with Primeval Vision (…aka the design / packaging side business of Aural Hypnox), also ties in with ‘Void’ release (…given they designed and screen printed the tape’s cardboard cover/ outer casing). Although not overly long, The Solar Zine is artistically refined and archaic in aesthetic, which brings to mind that special ‘obscure and esoteric’ feel of the newsletters issued by the likes of Cold Meat Industry and Dark Age Productions back in the mid to late 1990’s (…a visual feast if you will).

To then turn attention to the audio context of the ‘Void’ tape, this features a single lengthy track on each side of the tape, which is self-described as: “intuitive reel-to-reel tape storytelling, herbal alchemy and ceremonial surrendering”. More specifically the sound featured is not too far away from the atmosphere of many Aural Hypnox releases albeit ‘Void’ is certainly more drone and dark ambient focused overall (…and lacks any overt ritual/ percussive elements that a comparison to Aural Hypnox might suggest).  ‘Sulpher’ leads off side A, with a slow pace and layers drone elements which slowly rise out of the murky background. Cyclic and oscillating in form, the sound gradually elevates to a more tonally forceful frame of reference.  With a brooding and meditative tone spanning the 19 minute span, there is however one ‘mid-toned’ wavering sound element which is perhaps slightly too prominent and distracting (…but equally is perhaps explained by the improvised nature of the initial recordings).  ‘Aether’ then features on side B as a 15 minute track which is more ghostly and darkly ethereal in scope.  Containing lighter ‘distant’ elements (…female voices? …male chants? …not quite sure…), which are grounded with lower ranged bass toned drones. As with the first, the piece gradually elevates in tonal force, where the piece allows full sonic immersion and ultimately meditative result. Although both tracks have their own character and particular strengths, ‘Aether’ is clearly the pick of the two.

Of specific note is the special level of care and attention to detail applied to be both tape and zine, which makes them worth tracking down for their physical manifestation, but with the limitation to a mere 50 copies this is potentially already out of print.  Yet with respect of the ‘Void’ recording, this can still be obtained digitally and evidently is going to be repressed on vinyl in 2017 via Autarkeia.