Following quickly on the heels of the split with Streicher, Totenrune has returned with another split, but this time with the noise/ industrial project Insurgence, and with the tape being issued on a new French based label.

For Totenrune’s 3 tracks it lead off with a murder confessional sample on ‘Libertine Atonement’ before the raw mass of distorted rumble and heavily treated vocals which provides a rough power electronics slant to the industrial-noise approach, although is also quite laid back in actual sonic agression. Being slightly more tonally forceful, ‘Rapture in Homicide’ then features spitting distortion and loose sense of structure and forward momentum (…although still relatively calm), while the final track ‘Mors Triumphalis’ is built around a prominent grinding loop and looser underpinning echo and rumble (…again being relatively laid back than what might be typically expected). As a general observation when comparing Totenrune’s tracks here to their earlier material on the Streicher split, the mood is more subdued and comes across as being more controlled and considered as a result.

In moving on to Insurgence’s contributions, although not having heard them before I am aware they have been compared to Deathkey, which is a somewhat valid comparison despite not achieving the same over the top fierceness. Regardless of this, the first of 2 Insurgence tracks is ‘Lost Innocence’ and demonstrates a step up in sonic intensity from Totenrune’s contributions.  The first segment of the track is based on a prominent ‘stones in a cement mixer’ styled loop (…coupled with samples, static and raw junk metal), before the second segment takes a further step up with blunt-force, churning noise and unhinged vocals (…all force-fed through a feedback grinder and treated with a heavy dose of echo and reverb). The second Insurgence track ‘Shine’ heavily deviates where it commences on ritual industrial routes with chanted vocalisations and cavernous catacomal ambience, before moving back towards to a brutal and chaotic and junk metal noise sound (…complete with shuddering/ burrowing structures and unhinged/ overblown vocals before coming to an abrupt conclusion).

Packaging wise a raw collage is featured on the colour J-card which is stylistically perfectly suited to the sonics on the tape.  Obviously this sort of release is not about bringing something new to a raw and ripping industrial-noise / power electronics sound, rather both projects simply deliver a solid dose of underground grit for the faithful.

By virtue of the project’s name the direct relationship with the long standing French project Le Syndicat should be clear. Likewise with some further sleuthing it reveals that Ruelgo (…currently the only permanent member of Le Syndicat), has been joined by Saphi of another French project Nocturne (…but even then it is still not clear as to whether this pairing is for this album only or on a more permanent basis, or whether his joining is the reason for the slight moniker variation).

To speak of its sound and style, personally I do not have a clear appreciation of Le Syndicat’s rather extensive back catalogue (…extending back to 1982), thus I can’t say how this new album generally compares.  Yet from direct listening it can be deduced ‘Morceaux De Choix’ is rooted in a general amalgam of experimental, noise and industrial styles. The promo sheet further indicates that a particularly studio process referred to as ‘reflex piloting’ has been used in album’s production, which: “integrates the loss of control and the surprise of generative errors, creating new unexpected sound forms”.  Noting this statement provides a brief explanation of the creative process of recording, it provides some clear cues as to how the album sounds.  Equally the final results seem in part to emulate a style and approach derived from a much earlier era of experimental industrial noise music (…meaning the 1980’s from a time where sub-genres where far less defined).

With its mixed sonic approach, the tracks meander and swing wildly between moments of calm and chaos, where the overt layering of sound elements provides a high degree of complexity to the material.  Selected tracks follow atonal rhythmic industrial approach (…formed around pounding and manipulated programmed beats); while other pieces feature fractured higher pitched ‘needling’ elements and panning stabs and slashes of distortion; and yet others employ fast paced and disorientating sonic cut-ups (…which embodies a sense of creative control, despite these looser and jagged tonal elements).  As for the sound production, it has achieved a sharp and clear sonic palate, and with its forceful and clinical edge it at times articulates a type of ‘mad sonic professor’ vibe.

With 10 tracks spanning the best part of an hour, this is an interesting concept but based on my own sonic preferences which does not extend to being a ‘noise connoisseur’ I am not likely to return to on a regular basis, thus this release is best suited to those who lean towards an appreciation of controlled and occasionally frenzied dynamic noise (…with more fleeting industrial and experimental type sonic textures).

With new material from Human Larvae always being a welcomed prospect, this release has followed quite quickly from the last exceptional album ‘Behind Blinding Light’ (reviewed here).  On ‘Methods of Submission’ it features in the order of 30 minutes of material via a single untitled track on each side of the tape, thus noting that this new tape shifts into a longer, freeform style, it steps away from the more focused power electronics and death industrial sound of recent albums.

Side A reveals a long form cut of rough and caustic, mid-toned and mid paced industrial noise. Featuring a heavily layered approach, various elements of churning distortion, spitting static and a solid industrial crunch (…which may just be sourced from junk metal). Sonically this track sits at the mid to lower ranged realm, and does not reach anywhere near ear shrieking intensity, but also pack a weighty sound all the same.  Side B follows a similar elongated sonic path, yet here the static and distortion are tonally pushed up a notch, while a number of forceful droning loops provide a sense of drive and forward momentum (…a half buried screaming sample introduced later in the piece also functions to generating a sadistic edge to the mood).

Although perhaps lacking the immediacy of tracks found on ‘Behind Blinding Light’, ‘Methods of Submission’ is a solidly intense and unrelenting dose of churning industrial noise filth, which certainly suits and reflects the BSDM theme of the artwork.  Packaging wise, Cipher Productions have produced more excellent results, with the cover featuring a small 8 page booklet housed with the tape in a canvas over-wrap and front panel cut-a-way.  With a short limitation of 75 copies, this is unlikely to be available for long. 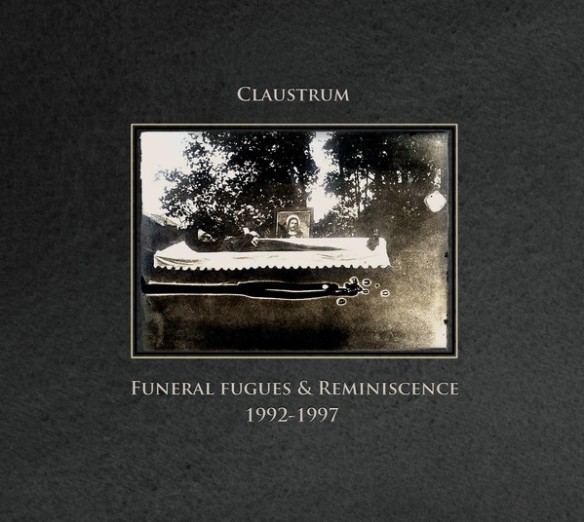 Claustrum are a Latvian project whom I am not at all familiar with, despite it seeming they have been around since 1992. But according to what background details I could dig up, evidently their sound has evolved over the years to include: dark ambient, industrial, neoclassical, martial industrial and power electronics.  As per the (perhaps obvious) title, this album collects together 18 selected tracks from the first 5 years of the project.

Although featuring early Claustrum material, this includes material which is well above what you might usually expect from the fledgling steps of an artist, and covers some stellar dark ambient offerings and more fully completed neoclassical tracks. Contextually speaking about the first half of the CD features sacral dark ambient type tracks, and in more than a few fleeting moments brings to mind the likes of the highly regarded Raison D’etre, (…particularly with the use of church bells, sampled/ manipulated choir chants and dank subterranean atmospheres etc). But this is not a case of Claustrum drawing direct influence from Raison D’etre, particularly given that both projects commenced in the same year of 1992, therefore they both clearly evolved a similar sound in isolation of each other.  On the later half of the tracks, a greater proportion shift towards neoclassical expression and features more heavily composed tracks which range from funeral organ dirges to rousing martial driven pieces etc. Regardless of styles covered, all of the featured tracks are on the shorter side (…given none exceed 6 minutes and most are around 3 to 4 minutes each), which provides the feel of short musical sketches rather than a holistically composed album, yet the musical flow still manages to meanders between pieces without jarring the general mood and atmosphere. Perhaps the only real musical missteps of the album is the darkwave styled ‘Instrument of Cacophony’ (…which include guitars and sung vocals), which to this ear sound clunky and awkward compared to the rest to the material, while some of the neo-classical elements do suffer from an overtly synthetic edge (…but is more of a minor observation).

As with most Old Captain releases, this has been issued as a cleanly designed digi-pack in a small edition run (250 copies here), which clearly functions to provide the label flexibility and scope to issue interesting obscurities such as this.