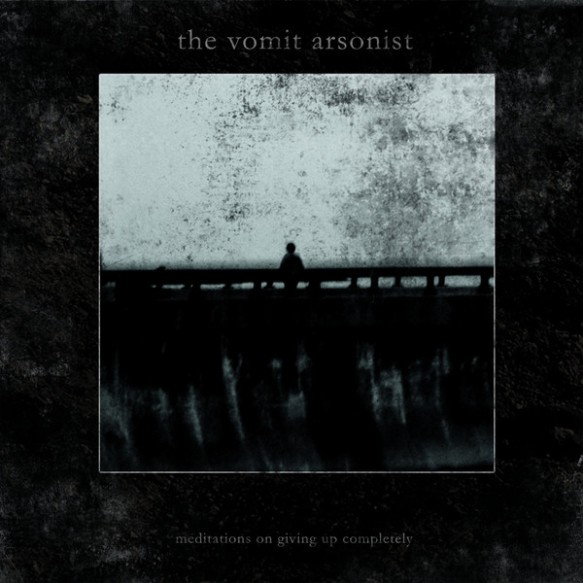 With a substantial discography extending close to 40 releases since 2004, ‘Meditations On Giving Up Completely’ is in fact only the 5th full length album from Andy Grant’s solo project.  In then taking a quick looking at Andy’s creative arc over the last few albums, ‘Only Red’ from 2015 was notable in that it took the brooding death industrial sound of 2013’s ‘An Occasion For Death’, but opted to ramp it up with an aggressively rhythmic approach.  But rather than potentially continuing on that more direct path, ‘Meditations On Giving Up Completely’ shows clear sense of honing, refinement and restraint in order to create claustrophobic death industrial atmospheres (…to rival the best moments of early Brighter Death Now).

‘Meditations’ opens the album with a minimalist “yawning chasm” tone (…this metaphor is to be read as industrial hum, echo & rumble), and with its semi-buried dialogue sample it very much feels as an introductory piece to set the mood. The following piece ‘What’s Left’ then features as an excellent offering constructed around a slow pummeling death industrial ‘beat’, idling machines and general wasteland ambience, as Andy’s agonized and unintelligible distortion charred vocals articulate a mood of anguish and desperation. Thus from the template established by the first two pieces, the following tracks effectively play out as further variations on these established theme. However to talk of notable elements, the wailing siren sound on ‘It Never Ends’ is a standout when set against a monolithic and slow pounding beat, as is the morbidly cavernous depth and gradually rising dread of ‘On Living’. During the album’s last third, ‘There is Nothing Here’ features a pounding beat that despite pushing towards a mid-paced rhythm the overall mood remains of one of brooding restraint, and with this same tone seeping into the final track ‘Sick Over’ (..which itself bleeds out in shuddering convulsions over 10 minutes).

With each track spanning around 6 minutes or longer, each of the 7 tracks are effectively elongated death industrial meditations on nihilism, underpinned with an enveloping sense of brooding despair. Likewise given the album’s general minimalism and restraint in deliver, its layered sonic elements and sporadic vocals have been meticulously combined for substantive impact. Without seeking to significantly deviate from what has preceded it, ‘Meditations On Giving Up Completely’ features a clear sense of honed refinement, and in the process has issued an imposing death industrial statement.