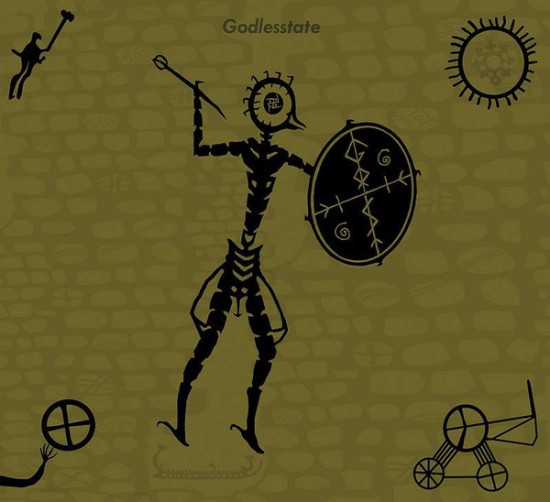 For this label showcase it is important to highlight that Hagshadow is run by Gaya Donadio: an Italian national, yet long term resident of London and a staple of its underground scene as a gig promoter via the Hinoeuma the Malediction banner.  Although Gaya’s role as a promoter may have reduced somewhat over the last decade (…when compared to the monthly shows in the early 2000’s), Hagshadow has been operating as a label since 2008 (…and mail-order prior to that).

Up first is ANTIchildLEAGUE, which is the solo project of Gaya herself, where ‘Holy Ghost’ appears to be the third in a trilogy of album’s starting with ‘The Father’ in 2008 and ‘The Son’ in 2014. However I am afraid to say that apart from hearing a few selected tracks from ANTIchildLEAGUE over the years, I have not heard these other trilogy releases, so cannot comment on how ‘Holy Ghost’ continues or differs from their sound. With that said, what ‘Holy Ghost’ brings is a sharp and clinically edged industrial album which bristles with fierce energy. With its 13 tracks spanning 47 minutes, the general impression is that of a collection of tracks, where differing sounds and moods are explored throughout.  With the opening title track being more of a introductory piece (i.e. solo female religious styled singing), ‘I Hate You’ follows and is a sharp and buzzing piece of looped power electronics (…think of the clinical and clean tone of Haus Arafna), with Gaya’s vocals being aggressively spat and slightly treated (…an excellent start).  As the album progresses from there, a pattern is then noted where some tracks are constructed around rhythmic programming and minimalist synth pads, while others following a stricter adherence to industrial and power electronics expression. With the vocals covering everything from spoken whispers to banshee like wails, these also mirror the moods of the tracks which themselves range from calm yet tensile, to those of controlled and/ or unhinged anger.  With some absolutely excellent tracks in among other generally solid offerings, it is perhaps an appropriate time to dig into ANTIchildLEAGUE’s back catalogue to check out what I have already missed.

Up next is the debut album from Godlessstate, but rather than being a young new project, it has significant pedigree in being helmed by Patrick Leagas. Noting this former Death In June member departed in 1987 and continued recording under the Sixth Comm banner, for whatever reason I have never properly investigated his releases over the years. Yet now some 30 years on from the creation of Sixth Comm comes Patrick’s new debut solo project under the Godlesstate moniker, and being: “a personal attempt to codify audibly the somewhat unfathomable ritual religious practices of our collective pre history..”.  What has been created is a rather imposing experimental tribal industrial album, based heavily around intense soundscapes and complex rhythms driven by martial drumming and hand percussion depending on the track.  The album’s rhythmic focus is further complimented by chimes, wailing horns, dulcimer, mouth harp, sub-orchestral synths, field recordings and varied vocals (i.e. whispers, chants etc. which function mostly as backing layers than providing central focus).  Selected tracks feel entirely organic in presentation, while others opt for elements of programmed electronic percussion to merge the archaic and modern (…although the consequential atmosphere is rooted in an 80’s post-industrial approach). Likewise while exploring different sounds and moods, the rhythmic approach is noted to range from Middle Eastern styled to more Euro-centric rooted sounds. With straight forward tribal industrial tracks and others of fully fledged ethno-ambient expression (…and which brings to mind a classic but short lived CMI project Memorandum), all in all this is a varied and interesting tribal industrial styled album.

Moving finally on to Sutcliffe Jugend, over the years the aura surrounding the project has been maintained by the sheer force of the extremity of their early power electronics approach, and in particular their highly coveted ‘We Spit on Their Graves’ 10xMC box-set from 1982.  Noting then then potentially difficulty in maintaining such levels of extremity, some 25 years later it was during the late 2000’s that the duo of Paul Taylor and Kevin Tomkins pulled back on the extremity to allow a greater degree of variety and experimentation to their sound. Furthermore the pair currently seem to be on a bit of creative streak as 6 albums have been issued since 2016 (…including this one). Although I have not necessarily kept up with all of the recent releases, ‘Shame’ is a considered and controlled album (…by Sutcliffe Jugend’s standards), and includes close to 50 minutes of material spanning 5 tracks. The title track opens the album, and with being based around a discernible guitar, the sound is one quite close to that of noise-rock (…sans drums) – or perhaps doom drone where the riffing has sped up to less catatonic pace. Although some nosier synth slashes are included, the guitar elements remain as the main focus throughout and the track definitely expresses a song format which extends to the vocals delivered in a half shouted/ half sung wail. Despite the musical focus of this track being far from what I initially was expecting –  it most certainly works as a listenable and engaging approach. The following track ‘Sledge’ is then more experimental with sparse atonal plucked notes and percussive sounds, leaving the vocals to issue a semi-aggressive rant.  This mood of restraint continues on ‘Hurt’ with its tensile and suspenseful tone, yet conversely the vocals are far more chaotic and unhinged in delivery and sonic treatment. Moving into the back third of the album, ‘Bait’ opts for a straight forward, mid paced pummeling riff, pounding rhythmic thuds and synth squall which are combined into a song style, which is reinforced by the ranted, half sung/ half screamed vocals. For the final of the 5 tracks, ‘Blood’ is an instrumental piece which bookends the album with a lengthy industrial soundscape of looped drones and cinematically tinged elements, which is calm yet tensile in equal measures (…and consequently and excellent track). Although I do not know how reflective this is of other recent albums and despite its quite significant deviation for my own (…perhaps ill informed) expectations, I have very much enjoyed this album.