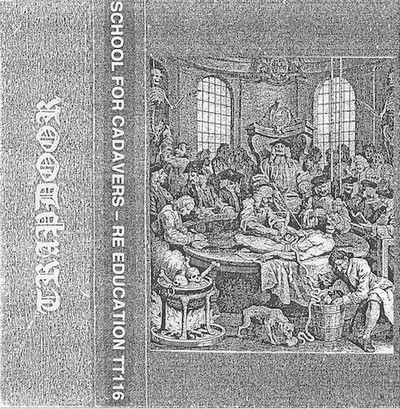 School For Cadavers is a new project featuring Jon Evans and Julian Percy, who are both members of Last Dominion Lost. In noting that context, there are clearly some strong parallels which can be drawn between the sound of these two project. Yet with reference to School For Cadavers, the tribal industrial elements of Last Dominion Lost has been toned down for a more streamlined industrial noise approach, which on a few occasion furrows within a dank death industrial style.

The tape features seven tracks in all and while three of those are denoted as being live recordings, this is not immediately evident given the consistency in recorded sound spanning all tracks. Sonar opens the tape with a screeching distortion, indecipherable yelled vocals and underpinned but an understated rhythmic loops, while the following track Spirit Of The Air contains a quite distinctly wonky and disorienting tone. Dead Time is a clear standout piece, based around cyclic throbbing mid paced layered loops and other sweeping tones which build in intensity, while other random slashes and cuts of churning sounds continual interject and gradually take over. Side B brings the absolute standout track Demise Of Logic, which is a monolithic pounding ritual death industrial track, completely with wailing air raid sirens, shuddering synth tones and garbled evocations. As for the final track Last Look blends a suspenseful horror soundtrack styled mood and coupled with a central slow pounding death industrial beat, while another screeched distortion layer ratchets up the tension. Great stuff.

Like the very much underrated and under appreciated Last Dominion Lost, School For Cadavers deliver expertly executed high calibre material, and should not be ignored or overlooked.