As per my usual disclaimer, noise music is not entirely my forte but I do dabble in listening from time to time. To then speak of noise stalwart Sickness (aka solo project of Chris Goudreau), the project has been active for over 20 years, however it turns out that Purgatory is not a new release. Rather, it was first issued on tape in 2013 (25 copies), reissued in 2015 (100 copies), and now reissued for a third time in 2018 on a less limited CD.

To speak of the music (ahem – ‘noise’), only four tracks spanning 18 minutes are featured. The opening cut The Unmagnificent Lives of Us All starts slow, but soon the building static represents a massive avalanche of sound which quickly shifts into rapid-fire noise and distortion blasts, which carries through to the next cut Not Much Left Of Me Now in increasingly chaotic form. The same approach is employed for Not Worthy of Heaven, where the choppy nature of the sonics rapidly cuts between harshness and fragmentary silence, which functions to amplify the noise when in full flight. Likewise, with the noise elements being tonally sharp and crisp it is akin to witnessing the massive sound and energy of arcing high voltage electricity. The final of the four track And I Wait is a slow burn and slow build of a needling mid-toned noise drone against a cavernous echoed backdrop, which only elevates to noise oriented territory in its final moments.

Given that noise is not my usual listening fare, the truncated format of this release functions to substantially increase its impact, but no doubt this short run time will have noise-heads wanting more. For this CD reissue, it comes in mini-cardboard gate-fold cover with imagery and text suitable to its title. 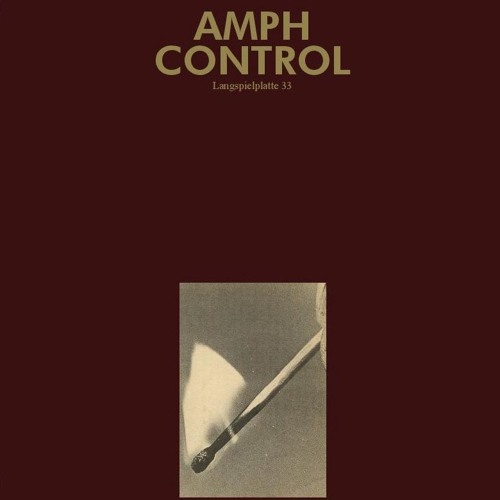 Amph are a Swedish duo operating since 2010 (well according to Discogs), but I am only familiar with their contribution to Verlautbarung’s 2013 compilation Stein: Interpretationen Eines Geologischen Materials Und Seiner Symbolik. My observations of Amph’s track After Nature was that it ‘opts for a queasy pulse and micro tonal layered sounds which are fine granted and detailed. The track is minimalist in structure but highly animated and rather forceful by tracks end and a great example of tape experimentations with a darker undercurrent’. To then provide context to this review, this earlier impression is equally applicable to this new LP.

Features two lengthy untitled tracks (one each side of the vinyl), there are definitive ‘sections’ and ‘movements’ on display. Early in the first track it features a ritual tinged industrial throb, deep heaving breathing textures, shimmering micro-tonal textures, and disembodied garbled but unintelligible vocals. Through the middle section the track becomes more mid-tone drone oriented, but this is also underscored with looped field recordings, creaking wood and metal which coalesce into quite raucously animated territory, and calms down again through the late section, complete with muted pump organ drone. Side B follows a similar trajectory, but the underlying abstracted field recording elements are looped into subtle rhythmic form. With an open and widescreen production it contains a very organic and rural sonic atmosphere, where wind-chimes and elongated drones maintain a dark edge, and thankfully far from anything remotely ‘new age’. In moving through other sonic segments, it features forceful melodically muted drones, twilight atmosphere of crickets chirping in a field, and creaking micro-tonal textures and other forceful loops.

Although with only a few releases under their belt, Verlautbarung continue to issue extremely strong and sonically divergent releases, with Amph clearly continuing this trend. With the cover featuring an image of a lit match, as a nice physical touch the cover has itself been spot charred with a lighter flame.

Artistically speaking Martin Bladh has always blended a physical and cerebral approach to post-industrial/power electronics, which clearly deviates from the perhaps more typical bare white knuckled rage often ascribed to the genre. This CD/DVD set is a continuation of that process and is a collaboration between Martin Bladh and Karolina Urbaniak who are both behind the Infinity Land Press publishing house, and while I am less familiar with Karolina’s artistic output, she is self described as: ‘a photographer and multimedia producer’. Regarding the collaboration Martin is credited for libretto & voice and Karolina is credited for sound, visuals & production. To provide further context to the release a passage from the promo text states: ‘On The New Revelations of Being is a multimedia work based on Antonin Artaud’s apocalyptic manifesto from 1937. It envisions the end of the world and the death of God through a series of cataclysmic occurrences of Artaudian cruelty. The piece was originally performed as a part of Artaud & Sound: To Have Done with the Judgment of God, at the Visconti Studio, London, on 15th September 2018. This final event in a series of events marking the 70th anniversary of Artaud’s death, after previous events at Cabinet and Whitechapel Gallery, focused on Artaud’s experiments with sound and noise, and on contemporary responses to them. This CD/DVD set contains the full audio recording, the backdrop film and the full libretto from the performance’.

As for the media content both the CD and DVD contain the same 22-minute compositions On The New Revelation Of Being, where obviously the DVD includes accompany visual material. Sonically speaking the ‘music’ sits clearly within an experimental sphere, but one which heavily leans towards and is rooted in the darker elements of the post-industrial underground. Animated drones, scattered noise, sharp piecing tones, sparse percussion, wailing horns, atonal keys, crushing junk metal and sharply edited/panning sonic cut-ups define proceedings, where there is also a distinct use of loud and quiet passages which dovetail with the vocals. As for the predominantly spoken vocals, these are highly animated and enunciated in an occasionally theatrical way, and are distinctively those of Martin’s for anyone who has followed is primary output as part of IRM and Skin Area, while later in the piece rise to a more agonized style for which he is known.

For the visual side of things, a similar sharp editing cut-up style is evident, with a kaleidoscope of apocalyptic imagery is employed, variously including visual illustration of: the immense power of nature (from a human scale perspective), autopsy footage, sex-change medical procedures, crucifixions, the brutal survivalist instincts of the animal world etc, etc. Perhaps the suite of visuals is somewhat expected for post-industrial spheres, yet the slick, clean, rapid-fire editing elevates this far above the realm of mere shock tactics. The overall presentation and particularly the visual component very much places this in a contemporary art sphere and would not at all be out of place as a art gallery video installation. To that end, and while clearly different in its ultimate visual execution, when watching the unflinching and intensely apocalyptic visuals, I was strongly reminded of of a time when I was perhaps eleven years old when I by happenstance came across a video installation in an art gallery of one of Hermann Nitsch’s live actions (and perhaps something which had a pivotal and lasting impact on my artistic sensibilities and preferences).

Apart from the CD/ DVD, it comes with a 24 page A5 sized booklet which provides further images and full presented text to flesh out the detailed theme and context. Noting the literary and artistic slant of On The New Revelations Of Being makes this for a release which strongly appeals to my own artistic sensibilities, by now it should be clearly apparent if this is of interest to you (and very much should be if you are already a follower of Martin Bladh’s output). Limited to a mere 100 copies.

With the typical music covered within Noise Receptor Journal, it involves spending large blocks of time listening to aggressive and predominantly dissonant music, which consequently results in a certain degree of desensitisation seeping in. It then takes something at the complete opposite end of the sonic spectrum to cut through such malaise and to re-calibrate one’s ears and reinvigorate one’s curiosity about new musical discoveries. This is one such release which immediately stuck out for reasons of lush musicality and has remained on repeat listens for weeks now. While not having heard of this project before, this is the debut release from this Swedish trio.

To comment on first impressions, the cover image is not immediately evident of musical style. But if I were to hazard a guess on image alone, I would likely have picked this to be a neo-folk, neo-classical or perhaps dark-ambient aligned release – but in the end this turned out to be completely wrong. Musically speaking, this is instrumental synthesizer-based music, where emotive non-lexical female vocals are sporadically used for added melody and emotion. Not being overly dark or heavy, the pervading atmosphere is heavily cinematic with an air of bitter-sweet melancholy. At time there is a perhaps a post-rock sensibility in the elevating style of musical composition, but instrumentally there are not guitars in sight, rather it is lush, swelling orchestral synth melodies, coupled with a hand pump organ and the aforementioned non-lyrical female vocals. Through its twelve relatively compact and individual mood or ‘scene’ based tracks, there is a real sense of listening to a movie soundtrack. Interestingly this initial impression was then duly confirmed by the promo blurb which clarified: ‘Ljudspårsmusik Vol. 1, is the imagined soundtrack to the book Girlfriend in a Coma by Canadian author Douglas Copeland’, so is illustrative of how successful the project’s aim has been to write music for a non-existent film.

Being limited to a physical edition of 100 pro-duplicated tape and fold out j-card, Ljudspårsmusik Vol. 1 is a musically melodic and emotively melancholic release which warrants due attention.