Already three years since the release of the excellent album The Spiral (reviewed here), Frederikke Hoffmeier’s new Puce Mary album has finally been released. Although technically speaking the digital version of the album was available in October 2018, the vinyl version was plagued by delays and not released until April 2019. While not being entirely clear as the to the reason for the delay, it has been absolutely worth the wait to have this on vinyl.

In building upon the template of the last album, The Drought is another standout and it is a joy to behold the meticulous way in which Frederikke approaches noise as a compositional element to build tension. Each track is distinct in stylistic character, where sound elements are constructed for maximum impact: sustained noise comes to resemble shrill orchestral strings, while grinding bass loops and abstracted monolithic thuds provide vague rhythmic structures. Compositions are carefully layered to ratchet up the tension, as is expertly displayed on A Feast Before The Drought which runs a knife’s edge through to an explosive crescendo. To Possess Is To Be In Control charts slightly new territory by commencing with an almost modern classical tone and confessional spoken vocals, but soon enough the sound veers off into a tensile high-calibre industrial track. A similar nod to an experimental modern classical tone extends throughout the second half of the album, covering tracks such as Red Desert, Coagulate, The Size of Our Desire and The Transformation, where synth elements give the impression of shrill orchestral strings. But even with these shrilly melodious semi-orchestral moments, the compositions do not forgo scattered micro-tonal noise and pummelling industrial elements. Likewise, the mid-paced throb and sweeping distortion of Fragments Of A Lily has an undeniable fist-pumping quality, and the album concludes with Slouching Uphill, another expertly executed track of elevating tension and subsequent emotive release.

As an artist Frederikke Hoffmeier displays absolute mastery of her craft, and in the process has developed a sound which is immediately recognizable and wholly her own. Building on what has come before, but also pushing her sound further into uncharted territory, makes for another stunning and absolutely mandatory album.

The rather illusive Proiekt Hat has returned to the Italian cult label XN Recordings and, based on the minimal presentation and title, this seems to be the third in a series on the label. When this release was announced the promo text indicated these two tracks were older recordings from the project, but the cover provides no further detail on this.

The first track Freeloader encapsulates a grey-hued sonic aesthetic with cavernous depth and thickly grinding machine oscillations and wavering bass tones. Laboured but also minimally animated it delivers a grim post-mortem atmosphere as an expectantly good track from the project. Iron Lung Cancer features on the flip side and without doubt is an extremely divergent track for the group. The first thought that went through my mind when hearing this was ‘This sounds like Proiekt Hat doing Kraftwerk’ and, as the saying goes, often first impressions are the correct one. Here archaic modular synth loops intertwine in very animated and uptempo form – albeit wonky and off kilter. Some more atonal elements sit underneath, but these very much take a back seat to the pulsing and driving forward momentum of the track. Being a sound I would have never expected from the project, it is a great track all the same.

To mention the cover, the minimal presentation mirrors the beautiful attention to detail which is characteristic of XN’s productions, while an inside image hints at strong anti-American imperialism sentiments. Although this 7” EP was far from cheap (in both cost and postage), there are no qualms about this based on the final product.

This is my first introduction to Anakrid, which is a solo project of Chris Bickel. The project then seems to have been active as far back as 1990, although the bulk of activity has been from the early 2000’s onwards. This short two track 7”ep is of an experimental abstract noise style, which primarily focuses on tone and detail than volume and harshness.

The first track Ugly is somewhat of a misnomer as the track constitutes a composition of elongated warm enveloping drones, which are tonally layered but minimalist in construction and feature a faint melodious resonance. Deep in tonal atmospherics, there is subtle complexity at play and makes for an enjoyable track, but which feels far too short in run time. In flipping over to side B, again it features a misnomer of a title. Pretty deviated stylistically by being significantly more animated with its meticulously layered approach, combining creaking metallics, cavernous tones, shrill mid-toned textures, sporadic gongs percussive like elements etc. At times reaches the shrill intensity of an orchestra string section tuning up, and in a fragmentary sense could be passed of as an atonal and abstracted contemporary orchestral track. But again the composition is far too short and it finishes just as quickly as it starts.

As alluded to above, the main criticism is the extremely brief run-time given how compositionally different but equally engaging these two tracks are. But that minor criticism can also be rectified by giving this a number of spins back to back to sate appetite. Black and white collage artwork rounds out and enjoyable, albeit short and sharp release. 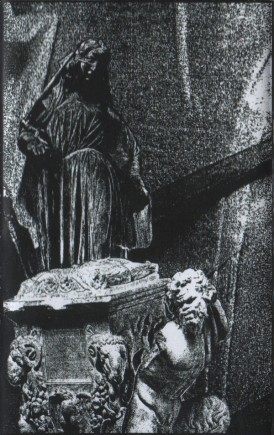 The Swedish project Feberdröm (translating to ‘fever-dream’) have been lurking around in the post-industrial underground since 2011 and amassed fifteen releases in that time (mostly issued on cassette). Emesis is then noted to be run by the same person behind Feberdröm, with these two tapes being the first items issued on the label. On the musical front Feberdröm are slightly difficult to classify, given they draw from a wide cross-section of underground sounds, including: industrial noise, abstracted rhythmic/ ritual movements, caustic heavy electronics, experimental guitar drone and other more ethereal atmospheres. But perhaps a descriptor of ‘abrasive ambient’ is a suitable catch all.

Blind Eden is then characteristic of this wide stylistic palette, where the track Blind Eden Falls is a particularly good example of moody droning atmospheres, abrasive textures and agonized ranted vocals. Likewise, the stilled rhythmic elements as featured on Death Of A Snake warrants a fleeting comparison to another Swedish project Stratvm Terror. Incinerators opens side B and mines a heavy electronics tone, as does the grindingly morose Concrete Apocalypse, while The Deed is Done rounds out the tape with sub-orchestral synth pads and a generally ethereal mood. On a whole Offerlammet is slightly less varied than Blind Eden, although there are abstract noise-scapes sitting adjacent to other tracks of programmed drums and atonal guitar drone. In fact Offerlammet is characterized by its greater reliance on guitar which is wielded in an experimental fashion than anything resembling standard playing, therefore resembles a doom-drones style at times – albeit without obvious riffs.

Given both tapes feature eight tracks each and both span 40 minutes, as a general comment I would say there are some excellent tracks which sit alongside more standard or typical ones. Thus perhaps then with a more focused and discerning track selection, it would take the material in a step up towards greatness. But even with that said, there is a lot to enjoy here and certainly nothing that it poor or woeful. Also for my own personal preferences, I find tracks which use abstracted guitars to be less engaging overall, which makes Blind Eden my pick of these two tapes. In noting the above, I imagine Feberdröm are a project to keep a watchful eye on.