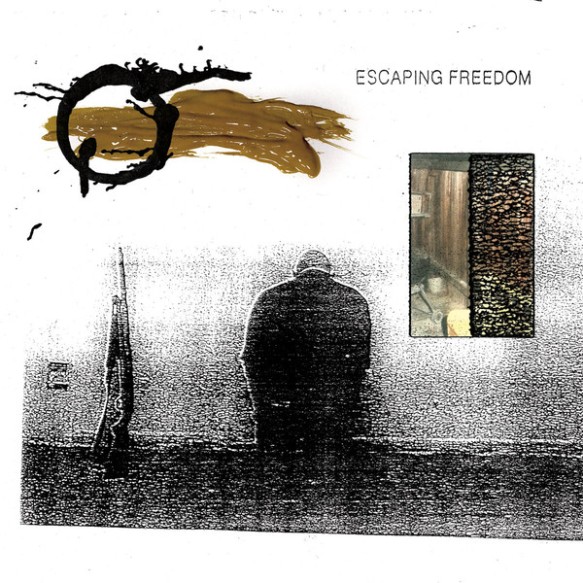 My introduction to Liebestod came from their first full length Beta Male from 2016 (reviewed here), but I then missed the self-titled cassette from 2017, and had already missed another self-titled cassette from 2014 (featuring different material). Thankfully Escaping Freedom functions to reissue all tracks from both of these earlier cassettes. In an overarching sense it is again a case that atonal shuddering synths, pulsing static, throbbing / squelching tones, distortion charred vocals and an underbelly of field recordings are the order of the day, with variations of these elements chopped spliced and structured into distinct noise compositions. As such Escaping Freedom again demonstrates Liebestod balancing a sound on a razor’s edge between a heavy electronics and power electronics sound.

The 2014 tracks come first, where For the First Time I Look Vulgar features an early tensile standout with wonky intertwining textures and a heavy elevating tone. The Most Irritating Pose is another noteworthy track of sonic restraint yet building tension, while vocals feature in an echo tinged deadpan delivery. Darkness is Easeful rounds out the collection of 2014 tracks with a solid offering which aligns with a modern and direct American death industrial tone. Going Home arrives as the first of the 2017 tracks, and uses a very effective use of a distressed voice set against a grimly brooding synth drone and field recording backing, while a rhythmic pulse appears only briefly in the later segment. One Day In April works quite distinctly on two separate levels: the first with lower end drones providing an ominous quality, while the higher shrill tones, erupting gunfire and charred vocals function to elevate the tension. Crimes Of Love provides yet further sonic diversity, featuring sonic breadth and space. Here the synths are pushed into the background, leaving the field recording in the foreground (dripping water in an abandoned building?), couple with upfront and whispered vocals for a ‘stalking’ tension driven track. This mood bleeds through into the instrumental track Strokes, before moving onto a deliver a sonic pummeling on The Things I Learned From Men. That track is very much an noise and aggression fueled power electronics piece framed around a stilted pounding rhythm, spliced with fluttering mid-toned distortion and guttural vocal barrage.

Despite featuring tracks from two separate releases, the combined material actually hangs together well as a single album collection spanning 12 tracks and 45 minutes. Yet if any criticism is to be leveled, it is in relation to the tracks being quite on the short side, given the shortest is under two minutes and the longest is just over four minutes. But this is also a sort of compliment, as based on the sheer breadth and variety of sonic ideas on display many pieces could be extended for greater impact and without losing focus, tension or momentum. Presentation wise featured a pro-printed six panel digi-pack with artistically designed imagery which hints rather that hits you over the head with grim imagery.