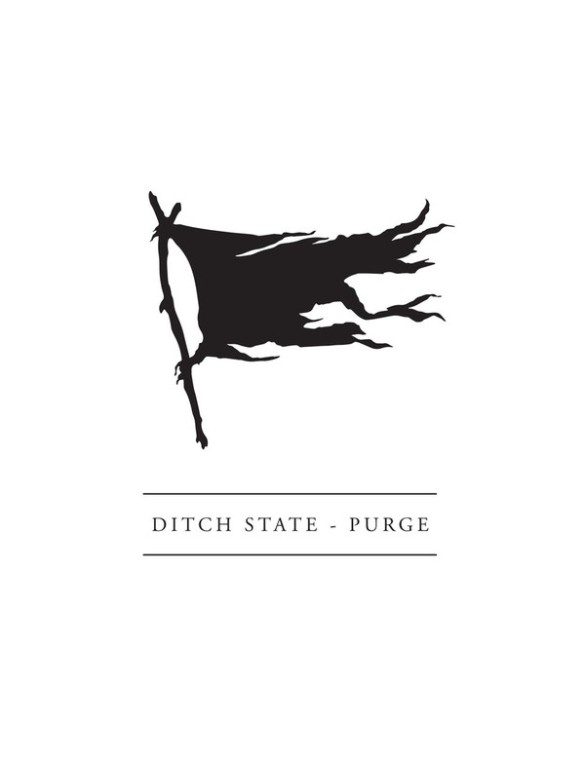 Ditch State is a new and purposefully anonymous project signed to Cloister Recordings. Yet, if I were to hazard a guess, this has connections to the Northern European sound and approach that radiated out from the now-classic 1990s / 2000s Cold Meat Industry era. Sonically speaking, Ditch State are clearly of a post-industrial type, but perhaps this could be described as taking raw death industrial tracks which are underscored with a martial-inspired song-based frame of reference. Given the stoic and heavily pounding standing kit drum, plodding atonal bass guitar, and song-focused vocals, a partial parallel could also be drawn between Ditch State and the approach showcased on recent albums from Nordvargr and Trepaneringsritualen – except that the ritual elements of those two have been replaced with a focused militant tone.

The album opens with the paired tracks Live to Destroy and Flattened Mounds, each of which is rhythmically framed around driving/pounding drum beats (played not programmed) and blended with bass, raw industrial loops, and minimal synth lines; the vocals are in a gruff and roughly yelled style. Silent Waves, in contrast, is a dour soundscape piece with vocals resembling an unanswered message broadcast over the airwaves. With these three opening tracks, the greater arc of the album is demonstrated, with subsequent tracks falling into one of two camps. The first are militant percussive-driven compositions (seven of the ten tracks). The second camp are interlude soundscape compositions that evoke the brooding ambience of a crater-blasted battlefield once the forces have swept through. All of the 10 tracks are on the shorter side (the longest is less than six minutes), meaning they function as standalone tracks.

Offhand, I can’t think of many direct comparisons to the specific sound of Ditch State (which is itself positive), but the militant-inspired death industrial style clearly has the potential to find an appreciative audience within the post-industrial underground. Packaging wise, the tape is housed in an oversized high-gloss cardboard box with the shredded flag logo printed in black on the front of the box. Limited to 100 copies. 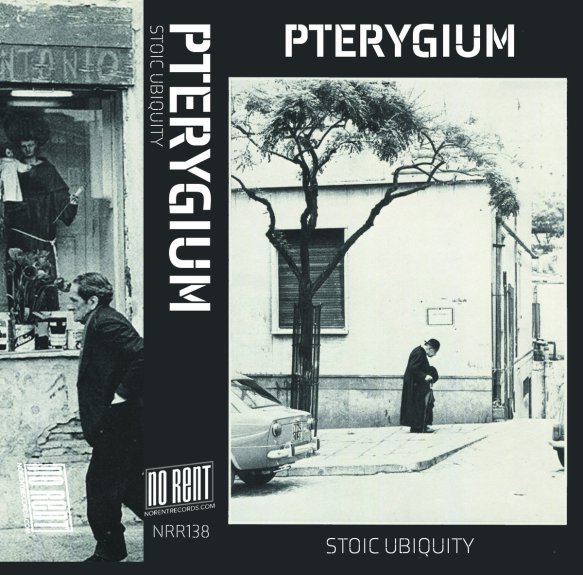 Following Pterygium’s second excellent album Concealing The Past on Tesco Organisation (reviewed here), this new full length tape has just been issued on the American label No Rent Records.

On Stoic Ubiquity Pterygium have taken their established ‘dual edged’ sound and twisted this for more harrowing and harder results. This is immediately evident on album opener 100 Sin, with its massive bass undercurrent, vaguely orchestral yet heavily melancholic synth lines, buzzing static, and harshly impactful tonal blasts. Various sampled voices also float in and out of the mix, providing a fleeting human reference point within the sonics. God Was Incapable is notable as it provides some respite, with well-placed dialogue samples fleshing out the concept and set against mid-toned clicking loops and a catatonic yet pummelling beat. Late in the track the sounds of a church bell tolling, cawing crows, and mournful choirs add a gothic-tinged aesthetic. Force Feeding provides yet more metaphysical musings set to sweeping drones, overblown bass tones, and slashes of static that build to a squalling cacophony of shrill tones. Yet these soon fall away into a section of tragically sombre sub-orchestral melodies. A similar mood permeates final tracks A Tragedy At Point Blank and 36 Heart, given the use of brooding sub-orchestral tones blended with unhinged static blasts and an undercurrent of overloaded bass.

Being somehow more aggressive yet underscored with a greater degree of melancholy, Stoic Ubiquity is no mere re-tread of what has come before. Rather, it is a clear refinement and expansion of a style and sound that Pterygium is very much making his own; the layering, complexity, and attention to detail of the arrangements are clearly evident. At this point it perhaps goes without saying to not snooze on this, as its physical edition is a mere 100 copies. You know what to do. 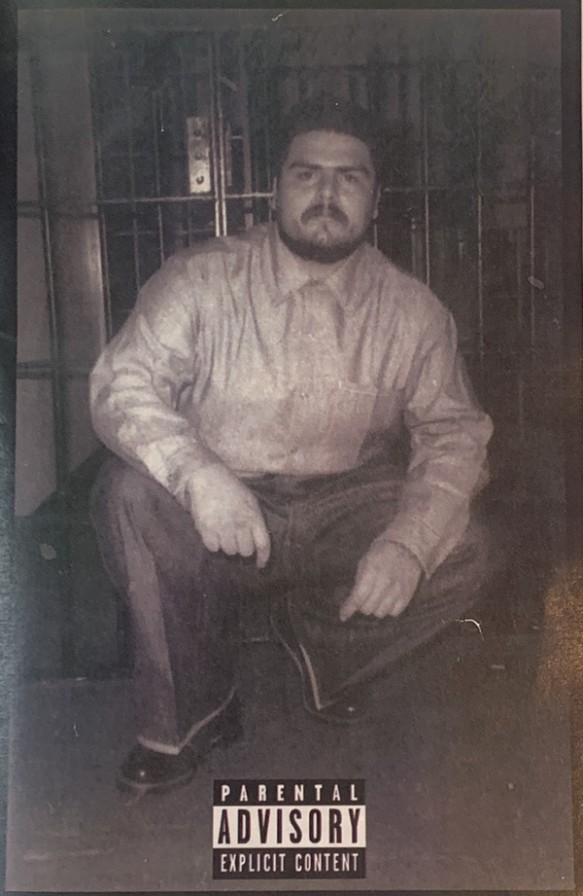 Crawl of Time is the solo project of Sam Montero Torres, who is one half of American power electronics group Terror Cell Unit. Operation Black Widow is the debut cassette album, following an early split release (2017) and a short promo tape (2019). Sonically speaking, Crawl of Time is not dissimilar to Terror Cell Unit, yet the differences are more substantial than the sonic comparison which could be made between Terror Cell Unit and Koufar (another side project helmed by the other half of Terror Cell Unit, to which Sam also contributes). Whereas Terror Cell Unit is focused on a hyper-aggressive sound with a cultural terrorist manifesto edge, Crawl of Time differentiates itself with a slow and laborious industrial noise / power electronics bent. Whereas in the former the themes at play are more of an observational documentary type, here there appears to be a broad focus on gangs and prison culture.

With the overtly aggressive elements slightly dialled down, the eight tracks are built around cyclic loops, well-sourced and placed samples, clean shredding mid- to higher-pitched drones, distortion, and squelching modular sounds. Vocals are predominantly spoken, sometimes with and sometimes without sonic treatment, but blend in within the mix. There are select tracks which stand apart, such as Tyrant And Slave (The Greatest War) with its stilted militant pounding beat, and Section V (Fratricide) with its harsh and needling noise assault approach.

The gold pro-pressed tape is housed in a zip-lock bag, along with an A5 booklet with collage artwork and lyrics, while the use of the ‘Parental Advisory: Explicit Lyrics’ logo on the cover is a nice touch of pitch-black humour. Over the one hour run time, Crawl of Time demonstrate a wealth of ideas and a meticulous approach to sonic compositions: the end result is unhurried and impactful, making for an extremely strong debut album. Clearly a project to keep an eye on. 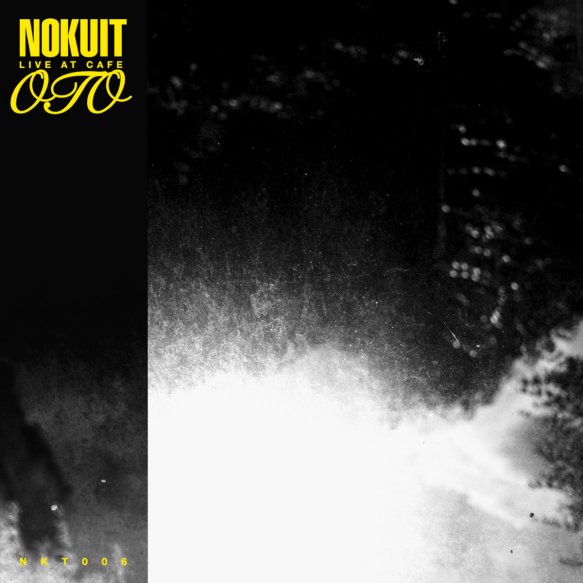 My first introduction to Nokuit was on the Patterns Of Instability tape from 2017, which I described as ‘an abstract but very effective sound-score to a modern dystopian film’. That impression is equally applicable here, and is partially reflected in the promo blurb: ‘A soundtrack to a film that has left its screenwriters behind, the unshackled camera runs riot across the set before drifting in on itself and out into the world, asleep at the wheel’.

In kicking off the 32-minute live set, low crowd chatter can be heard at the start of the tape indicating the nature of the recording. But when the music hits its full stride, based on the tonal bulk, volume, and sonic detailing, I assume that the recording was taken directly from the soundboard and further tweaked and mastered in post-production. As a recording it unfurls as a singular interlinking live piece; segments of doomy synths from Patterns Of Instability are noted, blended with segments from other releases with which I am not familiar. Melodically melancholic synths and piano lines, and muted mechanized post-industrial debris, are the general order of the day. Charred and digitally crisp tonal slashes give a real sense of live improvisation, and are used to underscore and interlink the longer moody droning passages. News report chatter and other dialogue samples sporadically appear, further reinforcing the filmic quality, yet rather than being clear in intent or message they suggest a vague dystopian atmosphere.

Being far from a mere document of a live performance, Live at Cafe OTO is equally as strong a release as Patterns Of Instability. Although clearly aligned with the cinematically-tinged post-industrial / dark ambient sounds of the underground, I get the distinct impression that the artist behind Nokuit comes from a refined world of sound design and trained composers given the degree of tonal, sonic, and melodic refinement. But regardless of artistic angle, this is a worthy release and I am intrigued as to what will come from the Nokuit camp in future.