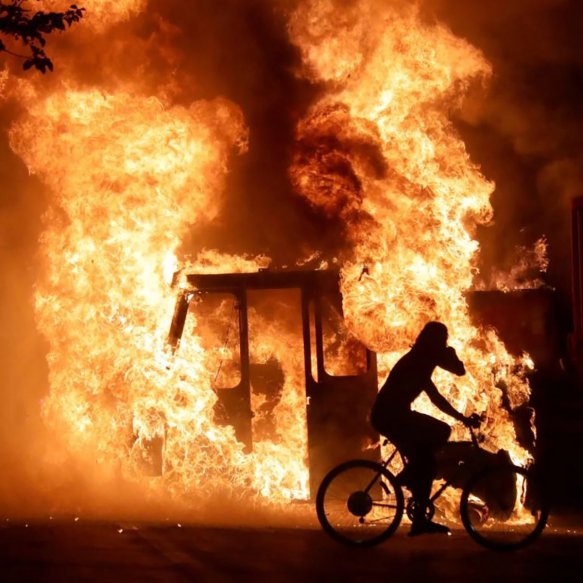 Stephen Meixner of Contrastate has been recording and releasing music under this solo guise for many years now and generally speaking it involves a more abstract and darkly experimental sound than that of the main project (yet some indirectly similar sonic threads too can be noted too). With reference to this latest work the liner notes highlight A Silent War had its nexus in 2020 UK Covid lockdowns and was intended as a working basis for further recordings, but obviously evolved into this standalone work. Likewise, the liner notes provide further detail on the working methodology, which was inspired by 1980’s recycling projects and involved recontextualising sound sources contributed by close associates. Six tracks make up A Silent War which includes an element of social commentary but is which is also not overtly emphasised. This is weaved within the crisply refined electronics which slot neatly under a ‘dark ambient / experimental / post-industrial soundscape’ descriptor.

The title track opens the album exudes a performance art angle, which is mostly due to the tone provided by manipulated spoken word vocals, while the minimal shimmering soundscape is occasionally interrupted with moments of melodic percussive strikes. Breathe continues and is framed around multiple electric to semi-orchestral drones coupled with a centrally placed jittery tonal texture, while further vocal cuts up referencing the track title and its thematic aspect. The instrumental track Virtue Signalling brings more interweaving melancholic drones but also includes a wonky pitch-shifting tonal framework blended with vague mechanical rhythmic elements and other manipulated tones (piano note stabs perhaps?). In maintaining the prevailing sonic theme the minimalist but incessant plodding pulse of Unfinished Business characterises the first segments before shifting off into melancholic drone territory with fragile tonal respite. We Demand Tomorrow (or business as usual) slightly differs, given it contains some forceful electricity-toned textures, while late in the track it morphs into musically playful and percussive-driven elements. As for the final track Singing About Revolution, it is a short two-minute cut and the oddest and surreal offering of the lot, to the point of being quite jarring against the tone of the balance of the album (and therefore well-positioned at the album’s conclusion). Here there is a clear nod to Contrastrate thanks to vocals provided by Jonathan Grieve, and notable the lyrics are credited to Nina Simone to close the thematic loop.

A six-panel double gatefold cover with extensive liner notes rounds out the packaging of an expertly crafted yet equally understated album of experimental ambient & post-industrial sonics.

Jagath is a relatively new Russian ritual-industrial project concerned with recording in unconventional locations such as underground sewers, mine shafts, and other abandoned industrial spaces. This results in the spatial sonic timbre of such locations being infused with other musical elements including vocals and handmade instruments (while also specifically avoiding the use of digital means such as synthesisers). The generated sound then sees a blending of raw post-industrial metallics and more archaic ritual elements of the vocals and handmade instruments. Evidently, the chosen recording location for this album was a monolithic decommissioned oil tank.

A key aspect to Devalaya’s prevalent atmosphere is the slow and controlled pacing, where the five meditative tracks unfold over an extended length. Deep guttural throat chanting drenched with reverb and thick bass drones introduces the album on Agadah (Abyss), where the subsequent track titles allude to a journey or transformation of sorts (i.e. Utthana (Rise), Catu (Conversation), Devalaya (Temple), Nila (Darkness)). As part of the broader approach, passages of ritual throat chanting are seamlessly blended with reverb-derived drones and further interspersed with slow percussive segments, distant wind instruments, sporadic use of ritual chimes & mouth harp, and the ever-present interjecting shards of metallic textures. Some aspects of contributed sound are clearly identifiable (such as metal being dragged over concrete, or metal striking metal), while the source of many other sonic elements remains obscured. Also of note, a number of repeated sonic elements across the album strongly remind of Alan Lamb’s classic ‘wire music’ experimentation.

For the physical presentation, the six-panel digi-pack is adorned with stunning photos, including some images that appear to be from the actual recording sessions. All in all, Devalaya is an extremely engaging album of emotive atmospherics which blends archaic pre-modern ritual sounds with a current aesthetic of post-industrial decay. But given its minimalist construct and controlled pacing, it certainly does not sound to be the result of a project with eleven members. 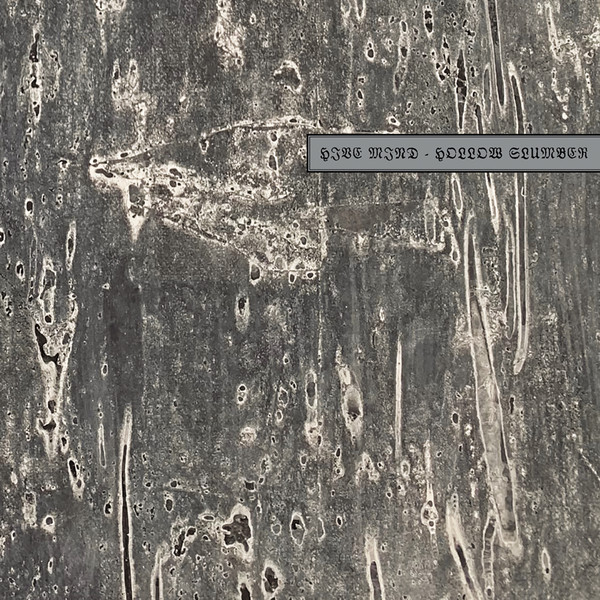 The American label Difficult Interactions issued the last rather excellent album by Hive Mind Elysian Alarms (reviewed here), and have quickly followed up with this newly issued item. However upon further investigation Hollow Slumber is not a new release, rather is a reissue of an earlier limited tape from 2008. On this version, the featured material is slightly extended in length and presented as a remastered 33.33 minute track, rather than being split over two sides of the original tape.

Being an exploration of extremely low sub-bass frequencies, this is music to be felt as it is much to be heard given its invasive sub-audible tone. As such catatonically slow modulated bass drones rise and fall throughout, as other subtle pulses and minimalist textural elements provide ever so slight variation. Equally, there is an ever glacial elevation in tone across its length, but that gradual shift in sound is nigh on undetectable as you are sonically enveloped in an ultra-dense fog of sound. As a comparative observation. given the deep tonal focus and churning minimalist construct, Hollow Slumber does beg a passing comparison to the likes of the subterranean industrial ambient excursions of Swedish artist Jarl.

With its extreme low-end and bass-heavy tone, Hollow Slumber is best appreciated on decent stereo and speakers where the volume can be turned up a couple of notches to give sonic breadth to the deep sub-bass frequencies and allow open-air propulsion of the enveloping sound waves. The resultant impact is the literal vibration of walls and windows as the sound waves can be felt filling the room like oozing black tar. This then clearly differs from headphone listening, as regardless of being armed with decent studio pair, the overloaded bass makes for a rather oppressive listening experience even at low volume. A four-panel digipack rounds out a rather tasty release.