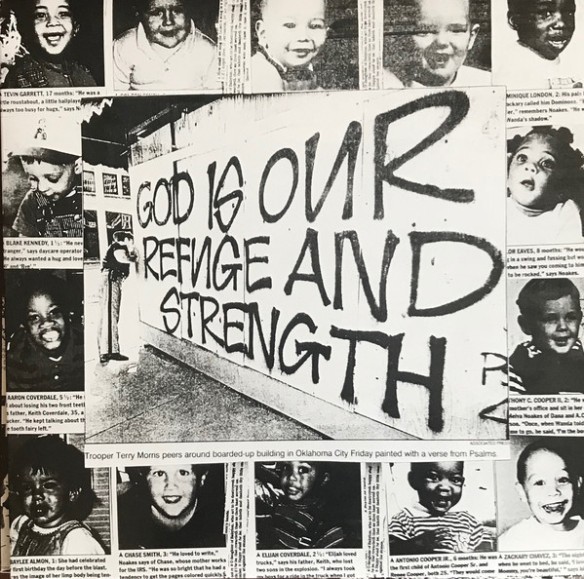 Terror Cell Unit have been rather active in recent years and of the 11 releases issued since 2014, six were issued in 2018 and 2019 alone. Psalm 137:9 has functioned as my introduction to the project, being a strongly themed, high-caliber power electronics release. With the project being an American duo of Mackenzie Chami and Samuel Torres, it is quite apparent they are inspired by the UK/European ‘cultural terrorist’ approach to power electronics, but equally have ample elements to put their own stamp on this sound.

This release, based on track titles, cover images, and dialogue samples, is concerned with Timothy James McVeigh and the 1995 Oklahoma City bombing, which killed 168 people (including 19 children – 14 of whom are pictured on the album cover). Further information on different elements of this incident, details of American white supremacist movements, and associated government responses such as Operation Cleansweep, are also provided via dialogue samples, additional sleeve images, and inserts. Given this thematic focus, it then specifically warrants consideration of the album’s title of Psalm 137:9 noting that this psalm states: “Happy is the one who seizes your infants and dashes them against the rocks.” While some theological interpretations say it is intended to mean a desire for justice through the metaphorical death of one’s enemies (this explanation also expressly ignores the practice during biblical times of conquering forces killing infants to sever the bloodline of their adversaries), clearly this is not the context in which it has been employed here.

The album opens with Suicide Mission Part I (Planning) which is a throbbing, seething, mass of throbbing bass, dive-bombing textures, and raw vocals processed beyond recognition, with a similar mood following through to Suicide Mission Part II (Executing The Operation) which is fleshed out with a documentary sample regarding the ease of accessibility of firearms within America. Vocals are courtesy of Mackenzie Chami (also of Koufar) and are strong and distinct, but perhaps in the context of Terror Cell Unit a greater degree of echo and distortion treatment has been employed (which makes the vocals less overtly prominent than their presentation in Koufar). Fear God/Hate Man functions to elevate the mood with its framework of mid-paced swaying rhythmic loops, fiercely framed mid to higher pitched distortion, and heavily processed ragged vocals. Psalm 137:9 is even more unhinged, with rough structures, buzzing noise, and vocals repeating the psalm of the track’s title. In stepping down a touch on the ‘machine idling’ pulse of Swine Feasting On Their Merchants, the vocals are processed to the point of resembling a pig’s squeal, and later replaced with samples of squealing swine. Patriot’s Day further fleshes out the themes of the release through documentary dialogue samples, which are backed by elevating layered distortion that builds to a chaotic sonic mass. In closing the album, When The Chickens Come Home To Roost commences with the emphatically screamed lyric of “we only say what the bible says”, before launching into a blistering and shuddering track of barely contained revving loops and general sonic mayhem. Fantastic stuff.

Being sonically strong and thematically unflinching, this is an excellent modern power electronics release. Although clearly not reinventing the wheel, there are ample sonic hallmarks and compositional techniques that give Terror Cell Unit a sound of their own. Likewise, attitude and aggression play a big part in whether this sort of material works or not, but given that Terror Cell Unit have both of this in spades, the project are shaping up to be a favorite new discovery – albeit I am clearly late to the party. Recommended.