Originally issued in 2013 on cassette via Merzbild, and again in 2015 on vinyl by In Solace Publishing, this third press takes the original three tracks and appends them with two bonus tracks for good measure, bringing the total run time to over 50 minutes.

Thematically this release relates to the Norse legend of the Swedish King Domalde, whose ritual self-sacrifice prevented an impending famine. This conceptual content is addressed within the cover image, which is a black and white excerpt from Carl Larsson’s famous painting Midvinterblot (Midwinter Sacrifice), whilst select Swedish song titles roughly translate to: For The Benefit of the Swedes, Blood Rain, and The Corpse of the Fallen Dómaldr. The original three tracks form sections which essentially bleed into a singular 30-minute ritual death ambient composition, music more characteristic of the earlier phase of the project before the sound mutated towards direct and song-focused compositions. But rather than the additional material simply being tacked on at the end, the two tracks are included as the first and last tracks respectively, to broadly fit and extend the mood of the original three compositions.

The first section (track one) is moody and minimal, with grey-hued drones, clanging sounds, and disembodied vocalizations; it feels like an extended introduction. The second section (track two) leads off with some gritty textural static; the main focus is squarely the procession of slow deathly drums, swirling winds, wavering synth textures and croaked/echo-distorted vocals, which combine to deliver an excellent track of slow brooding ritual menace. The third section (track three) is sparser in construction and encompasses an air of distant abstraction to its voluminous atmosphere. Here a lone cavernous bass thump provides focus in amongst various sweeping/cavernous tonal elements and the call/response of howling wolves. The fourth section (track four) continues the windswept sound in a slightly more forceful guise, building upon ominous drones, a slow percussive bass pulse and a melancholic synth line akin to the title track of Brighter Death Now’s Necrose Evangelicum album – an excellent and harrowing conclusion to the main collection. The final section (track five) spans out over a 14-minute stretch with freezing windswept plains, ominous bass drones, and slow semi-buried ritual thrum.

The expanded version of Konung Dómaldr Vid Upsala Hängd is an excellent release within the project’s discography and a strong reminder of the earlier soundscape death industrial sound of the project.

Strictly speaking Kim Sølve’s Blitzkrieg Baby project is quite incongruent to the typical coverage of Noise Receptor Journal. Yet there is something quite special in the cynical black humor and heavily sarcastic lyrics wrapped up in a diverse song-based approach, spanning elements of cinematic/orchestral dark ambient, martial industrial, and more streamlined song-based industrial. In fact, the Looney Tunes inspired cover artwork ‎– which strongly speaks to my own childhood ‎– is an excellent visual presentation of this thematic and stylistic approach (the artwork is by Trine + Kim Design Studios, which is the graphic design firm Kim runs with his partner and showcases their talents as graphic designers). Likewise, the self-described tag of ‘Norwegian Dystopian Electronic Music’ further emphasizes the approach.

Album opener Hip Hip Hooray displays the cynical and darkly playful nature of the album, with a track of mid-paced bass guitar-driven swagger, while the spoken vocals break out into a chorus chant of the track’s title. After a short instrumental interlude with an industrial/orchestral dark ambient track (Apocalypse To Go), comes Boys Will be Boys, which is a perfect example fusing martial beats, orchestral synths, and dark pop-focused chorus line hooks, with the end result being swaggering rather than martially stilted. The pairing of tracks like The March of Human Progress I & II bring a more serious tone, which is mostly due to the instrumental format, thereby the cynical element brought about by the vocals is absent. On the musical front it strongly reminds me of the martial ambient industrial sound of Toroidh, given the slow dark ambient throb, sub-orchestral elements, and marching music samples. Perhaps for my own listening preferences Praise The Pig comes off as the only misstep due to the prominent chugging guitar riff (but that says more about my personal aversion to guitar-based industrial). Yet despite this criticism, the tolling church bells and chanted male vocals which appear late in the track effectively win me over. Moving towards the album’s end, the dour yet playful nature of the album is again in full flight on Pre-Cum Of The Apocalypse, with a slow brooding dark ambient/martial industrial track, where the lone piano line rings out with reverb, while the vocals are sung choir style which belies their cynical slant. The album closer, Homo Sapiens Parasitus & the Countdown to the Apocalypse is an industrial pop stormer of a composition, driving ever forwards with stoic rolling beats and vocals ranging from whispered to full rousing male choirs.

Despite its vein of cynical black humor on the thematic and lyrical front, the music itself is treated with utmost seriousness, and done exceedingly well, avoiding any notion of being ‘cheesy’ in the end result. This is no mean feat, given the use of any level of ‘humor’ in post-industrial music usually predicts my total uninterest. Wildly divergent – yet recommended at the same time.

To introduce K100 to the unfamiliar, it is an obscure project operating within the field of dark ambience, although sole project member Kim Solve is likely to be better recognised for his other industrial act Blitzkrieg Baby.  With K100 Kim has opted to focus on the more subtle and abstract side of musical expression, which nicely counterbalances the militant industrial bombast of Blitzkrieg Baby.

Although ‘The Vault of Apparitions’ contains 12 compositions (spanning 51 minutes), as is often the case with this type of music it is best appreciated as a singular composition / body of work.  Thus from the album’s opening moments the atmosphere is hollow, distant and ominous, where low mechanised humming textures merge with sub orchestral drones.  As the album progresses it becomes entirely apparent that this is also dark ambience of the deep shafts and subterranean caverns typology.  Here the tonal reverberations of cavernous spaces mingle with other textures that sonically articulate the low distant rumble of far of thunder (…or perhaps some other far worse nameless entity lurking in the depths).  But far from being all drone and drift, there are occasional vague metallic rhythmic tones intermixed with the yawning catacomb bass tones.  Likewise further sonic variety is achieved through other tonal elements such as ritual gongs / chimes and a Tibetan thigh bone horn, where the drawling horn note of the later instrument bleeds out into widescreen textural drones.

Broadly subtle in texture – like a dank fog which slowly creeps over the landscape – ‘The Vault of Apparitions’ sits within stalking and suspenseful soundtrack territory.  Also with the organic feel imbedded within the deep bass drones, the result has a partial affinity with the ritual drone works of the Aural Hypnox label collective.  Given its abstract and subtle nuances ‘The Vault of Apparitions’ is not an album of immediate impact.  Rather it is an understated slow burner, where the key to unlocking its rewards are patience and detailed attention. 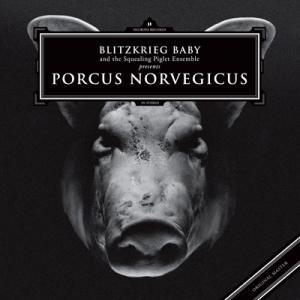 Blitzkrieg Baby is the twisted industrial music project of Kim Solve, who perhaps at this point in time is more recognised for his graphic design work for a range of underground labels, bands and associated music scenes.  Nevertheless ‘Porcus Norvegicus’ – being debut album for Blitzkrieg Baby – demonstrates Kim is extremely talented in creative fields beyond just graphic design and visual arts.

When relying on the term ‘industrial’ to describe Blitzkrieg Baby, it must be understood this is used in a relatively loose capacity, as the range of genre cues and influences presented on the CD are certainly diverse.  Maybe making comparisons to aspects of Coil, Laibach, and NON will give an impression of the musical diversity on display here.   There is also a dark cinematic quality to many of the compositions which play out as if being the soundtrack to an imaginary horror/ suspense styled film.

Album opener ‘First Movement, First Kill’ has a certain apocalyptic tone which leans heavily on a tense cinematic orchestral sound, with its martial brass, booming timpani and shrill horror strings.  Alternately ‘Pig Boy’ is a superb militant industrial track, which is built on a heavy pounding beat/ marching snare, disharmonic string/ brass wails and aggressive screamed vocals.  Although an extremely short piece, the fantastically titled ‘Disneyfied, delirious and HIV+’ delivers  a short ditty of a track constructed with up-tempo classical string samples to generate a weird carnivalesque vibe, which is total antithesis to the prior pieces.  Alternately the following pair of tracks ‘Incinerator Symphony’ and  ‘Stalker’ deliver further soundtrack worthy industrial/ neo-classical compositions, with pounding percussion, twisted violins and horns of doom providing a suitably tense and anxiety inducing tone.  ‘Fuck Me Like You Hate Me’ differs quite significantly from the material which proceeds it, by virtue its monotonous grinding militant industrial beat and verse/ chorus/ verse yelled vocals, thus making it one of the more song oriented pieces.  ‘Children In Uniform’ is also another song oriented track, but here delivers a skewed industrial piece with layered marching snares, sporadic orchestral elements and vocals with a politically rally cry type quality.  Another stand out track is the late album piece ‘Slasher’, that with a solid dose of angular strings and pompous percussive backing draws a passing comparison to the musical works of fellow countryman WHEN and their brand of abstract experimental and orchestral weirdness (…which is obviously meant as a total compliment).

Beyond the prevalent dark soundtrack type sound which is infused within most compositions, interestingly there is also a perverse and sly aspect of humour which underscores the album’s atmosphere.  This is something akin a knowing wink which highlights that Blitzkrieg Baby is not all ultra serious doom and gloom, which certainly gives the album an aesthetic sensibility not often found within such music.  With reference to packing and presentation, as would be expected its design is impeccable, being presented as a mini gatefold card cover with 12 page booklet.  Ultimately ‘Porcus Norvegicus’  (translating to ‘Norwegian Pig’ perhaps?!) is a smart, sophisticated and expertly executed album, which certainly stands on its own within the current ‘industrial’ scene.