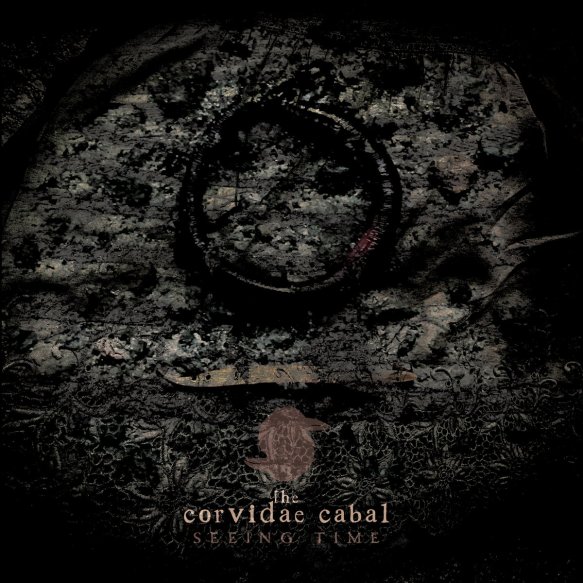 With a little investigation, it is revealed that The Corvidae Cabal is a side project to Gruntsplatter, where the project was created by sole member Scott Candey to seek different ways to approaching composition and theme. In noting this deviating thematic approach, The Corvidae Cabal functions to focuses on esoteric and paranormal subjects. Seeing Time is the first formal album from the project following a series of miscellaneous digital-only recordings from 2018.

Noting this is my first introduction to The Corvidae Cabal, on a superficial level is not too far removed from the works of Gruntsplatter. However, to then focus on differences, there is a reduced level of crushing claustrophobic bleakness and slightly more open and widescreen tonality than Gruntsplatter, as well as greater use of rhythmic elements to frame compositions. Thus a typical approach employed here involves swirling and grinding synth textures which are underscored by slow rhythmic patterns. To further describe the rhythmic elements, some of a stilted mechanical type, others of a slow ritual bent, and yet more of a commanding martial/death industrial percussive drive. The compositions themselves then develop in an unhurried fashion, being very much of a dark ambient approach with a dash of death ambient/industrial added for good measure. As with the recent Gruntsplatter album (reviewed here), this is best appreciated as a complete album. Likewise, Thomas Garrison has again done a wonderful job with the mastering.

Clearly not reinventing the stylistic traits of its chosen style, Seeing Time remains a strong and creative take on a dark ambient/death industrial sound. A four-panel obliquely designed digipack rounds out a slick and cleanly designed physical presentation.