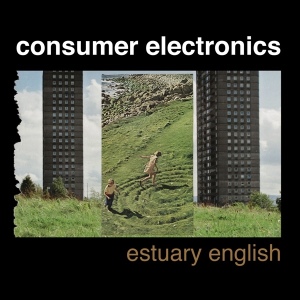 Following William Bennett’s disbandment of Whitehouse in 2008, Phillip Best obviously threw his attention into his own Consumer Electronics project, which since its reactivation in 2007 has gone through a couple of collaborative line-ups.  Most recently it has solidified around Phillip Best (obviously), Russell Haswell as producer/ electronics and Sarah Froelich (now Sarah Best) also on electronics and occasional vocals.  Yet in the months before this album was released a minor ‘internet controversy’ erupted in response to a number of recent live shows, raising question of what could potential be expected from the new album.  Topics of contention focused on the supposed digital sound of new material, the use of (gasp!) ‘techno beats’, and not least Sarah’s vocals.  Such controversy was further stoked when it was announced the new album was a mere 22 minutes long, but being pressed at 45rpm on 2xLP.

Given that I personally do not care for the digital vs analogue debate; I am more interested in the overall feel and impact of a recording.  So yes, ‘Estuary English’ does feature a digital, crisp, clean and most importantly loud production, but this works given the tonal variety across its 6 main tracks and the sheer force of its sonics.  But this is also a Consumer Electronics album; where a huge degree of focus will be on the vocals and lyrics.  Thankfully ‘Estuary English’ features some of Phillip’s most focused and densely constructed lyrics to date, which are all the more powerful given the force of their delivery and most importantly the quality of their recording.  Effectively each spat word drips with disgust and sheer disdain, being an eviscerating ‘naughty word’ laden examination of contemporary UK society and cutting individual focused psychoanalysis. In fact, regardless of its sonic backing it is the lyrics, the spiteful means of their delivery and their clarity which makes them THE standout element of the album.

‘Teknon’ opens proceedings, with a clear focus on the vocals which can hardly be ignored given they are sharply focused and mixed upfront – the only musical elements being a ‘barely there’ fractured squelching tone.  ‘Affirmation’ follows and is structured around an queasy oscillating drone and scattered sound elements, with the ranting vocals again being pushed to the front of the mix.  ‘Sex Offender Boyfriend’ is easily the album standout; an absolute revelation of a track, featuring muted muffled semi rhythmic beat and droning sweeping layers which pan left and right through the speakers, whilst the brilliantly dense and manic vocals are pushed to over the top, self-choking intensity.  This album is worth it for this piece alone in all its 4.26 minute glory.  ‘Come Clean’ follows, constituting a fierce reworking of ‘Cockpit’ from ‘Crowd Pleaser LP from 2009, here being a 2 minute blasting wall of piercing tones and shuddering, overdriven noise mayhem; the vocals processed with a sharp digital edge and semi-buried within the mangled sonic mass.  Another album highlight.  However ‘Co-opted’ is the weakest track on offer (and longest at 5.18 minutes), but not so much for the musical framework of grinding semi-muted 4/4 techno structures and pulsing sweeping digital noise (….although the ‘music’ does sound somewhat pedestrian and uninspired).  Rather this track is the weakest for its absolute lack of lyrics, where only the single phrase “Co-opted by Cunts” is repeated over and over, consequently becoming flaccid in its potential impact.  But then again maybe I am missing the point and each listener is meant to critically self-evaluable whether they are in fact one of the ‘cunts’ co-opting the underground power electronics scene? Interestingly this is the only piece where Sarah gets to display her vocals but which are relegated to a mere couple of wailing backing vocal lines late in the track.  Critically speaking Sarah’s vocals pail in compassion to the rock hardened spite of Phillip’s, so it remains to be seen whether Sarah’s vocals will become a lead feature on future albums.  After this somewhat filler of a piece, the title track redeems proceedings with blasting digital mayhem and the sharply invasive lyrical tirade. Finishing with a rather poetic 30 second spoken word piece ‘Air Lock’, ‘Estuary English’ feels FAR longer than its mere 22 minutes play time, which only exemplifies the extent of ideas crammed into this album over such a short span.

Noting I did not come to this album with any of expectations of what I wanted it to be, rather I aimed to listen with an open ears to the potential alternative directions Phillip might be pushing the project.  Regardless of the back and forth arguments over the short run time, its digital sound, the chosen format of 2 x 45rpm LP’s for such a short release etc., this has been for me at least one of the most listened to and appreciated albums of recent times.  It is an album I have returned to regularly, and despite its outwardly spiteful negativity, when it hits its mark there is an aspect of unbridled ecstasy when listening to this.  The apparent outward chaos on initial listens also falls away over repeated listens, to revealed the degree of meticulous detail of the album’s construction.  Although Consumer Electronics have often been passed off as a mere a side note to Whitehouse, ‘Estuary English’ demonstrates they remain an individual force to be reckoned with.