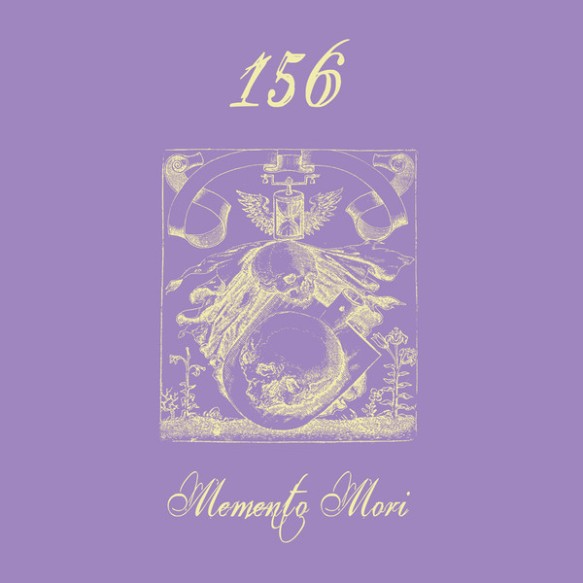 Although 156 are a project I have little awareness of, Adel Souto appears to be main member and key contributor to the project. With a handful of releases issues since 2012, this EP is one of the more recent offerings. While I am not sure how this compares to other releases, on Memento Mori all tracks have been composed and recorded using only human bones as percussive or wind instruments (i.e thigh bone trumpet). Thus taking ques from one of the earliest ritual industrial pioneers Zero Kama (and more broadly Nekrophile Rekords), there is a deftly archaic and moody in feel and atmosphere to Memento Mori. However such a contextual reference point is more than a mere compassion, given that one of the tracks (Starlit Mire) is noted to be a cover of a Zero Kama track from The Secret Eye Of L.A.Y.L.A.H.

As for the resultant sonics, the material is relatively simple and straight forward in execution, including minimalist percussive thrum, micro-tonal scraping textures and wailing atonal bone trumpet notes. Yet clearly the source material has been subject to studio treatment in the form of manipulating the recordings into series of structural loops and more widescreen soundscape drones. With nine tracks in all, each is a relatively short exploration of its tone and mood (with tracks ranging from one to five minutes each), with some being meditative and ritualistic, while others are heavily percussive driven. Rather intriguingly, the vinyl has been cut at 45rpm, with the intent that it can also be purposely played at 33rpm to create a slower elongated experience of the offered tracks.

For the physical manifestation, the music has been pressed into a hefty slab of bone coloured vinyl. The printed cover is then noted to feature a colour scheme which gives a further nod to Zero Kama, given it replicates the colours of The Goatherd And The Beast 10”EP. Archaic and obscure in the best way possible, Memento Mori is very much worthy of investigation.

As an introductory comment, I must admit this album was very much a slow burner for me. After I tracked down a copy of this debut album from this obscure and anonymous project, I gave it a few spins and thought it to be a quite OK example of German toned heavy electronics, but then promptly forgot about it with a mountain of other new material to listen to. In fast forwarding a few months I then kept seeing people online singing its praise as one of the best albums of 2018, which raised my interest me revisit and reevaluate, which I am really glad I did as this is a truly excellent release.

To speak broadly of its sound, Morality Ends is built around molasses thick bass structures, which in slow laborious loops forms the broader sonic approach. Yet subtle variation in both structure, sonic intensity and sampling maintains interest across the album’s eight tracks. Gralsritter opens the album in relatively subdued bass toned loops, prior to the real action commencing with Let the Guns Begin, which steps up with squall and static and a number of nationalistic styled samples through the later half. Our Justice reminds of a particular windswept heavy electronics sound prevalent German project in the early 1990’s (think early Predominance sans keyboard melodies), while Greensboring is a complete standout by virtue of it its pulsing bass, mechanized metallic loops, short wave radio static, ominous programmed beat and semi-buried crowd and dialogue samples (which I am assuming relates to a 1979 incident in Greensboro, North Carolina when five members of the Communist Workers Party who were participating in a ‘Death to the Klan’ rally were shot to death by a group of Klansmen and neo-Nazis).

Side B presents a further four quality tracks, with Puppet of Masters being another standout cut framed around a militant thudding beat, orchestral styled drone, building washes of distortion, and yet more semi-buried samples. To then make reference to the variety of chosen samples, a number of these begin to paint a vague conceptual framework which focuses on the racial divide which underscores American society both past and present, but like any good underground post-industrial music, the use of such samples raises clear questions about meaning, message and intent. Drilled to Kill is one of the most animated pieces of the album, and while it stops short of being blood boiling it is certainly amped up compared to other tracks given its grinding loops and fast paced pulsing structures. This mood continues with the faced paced panning between speakers on Church of Death, which creates a very disorienting effect, while Noble Hate closes out the album with vigorous layered loops, mid-toned static and prominent current affairs sampling addressing the KKK and the White Power movement.

Given I am now singing the praise of Morality Ends, credit needs to be given to those individuals who highlighted on social media platforms as being an excellent release, as otherwise the LP would have been relegated to a semi-forgotten release on my shelves. Ultimately, I think my initial impression was perhaps more of a case of sonic fatigue at the time, yet in the re-listening Morality Ends clearly benefits substantially form significant volume in order to bring the deeper semi-buried elements to the foreground. As for the physical presentation, a no frills black and white cover rounds out a very solid release.

Tamon Miyakita’s project Am Not is very much a current ‘leading light’ in the underground. With a sound built upon an established bedrock of the post-industrial scene, Am Not have also developed a highly recognisable approach within a heavy electronics/ power electronics/ noise industrial style. In then noting that the key releases from the project being able to be counted on a single hand, Am Not’s discography is already extremely focused, meaning the project is yet to disappoint. This new release continues this established modus operandi, and pleasingly contains an album’s length of new material (approx. 40 minutes).

The tape opens with the track Into Hostile Space and features an archival sample of George Bush Jnr, which in today’s context is far more interesting given the current US political climate. Musically speaking it features all the hallmarks of the best elements of project, where roughly hewn metallic tones are offset against crushing loud and sonically thick loops and mid-toned tensile drones, as the heavily process vocal barrage rounds out a storming opening track. But in moving away from a now recognisable sound Am Not, Incursions is noteworthy for its willingness to experiment and push into uncharted territory. Once such example is Feindes Land with its initial blending of neo-classical and dialogue sampling, which quickly gives way to a swaying, electronica tinged industrial track, completed with spoken vocals courtesy of Hermann Kopp. As for another significantly deviating track, Auf Wiedersehen, Pet could perhaps be playfully described as an unnamed Soviet era project trying to emulate Kraftwerk! Continental Drift III is also sonically differentiated from the rest by the fact of how subdued it is, and is framed around deep sub-orchestral drones, passive echo treated junk metal sounds and spoken Russian female vocals. Elsewhere a perhaps more ‘typical’ highly composed power/heavy electronics sound of the project is employed (i.e. top notch), but one striking example is Irruption where the rabidly intense vocals are immediately recognisable as that of S.T.A.B. Electronics.

Thematically speaking prominent dialogue samples are strongly represented, while guest vocals are employed and feature on a number tracks, where I was later informed that Tamon’s (English) lyrics on the opening track are repeated in different languages on three other tracks (including: German, Gaelic, and Russian), thereby subverting its meaning and message from a singular perspective. Thus, apart from the outstanding strength of the music featured on Incursions, part of the enjoyment of engaging with a release such as this is carefully listening, picking apart and interpreting both samples and lyrics (where detectable). To that end at a most simplistic level the thematic preoccupations of Incursions could be interpreted as a multifaceted analysis of nationhood, identity, sovereignty and associated political influence in a globalised context which has emerged following the Cold War (but as always there are likely to be elements I have perhaps either misinterpreted or otherwise completely missed). Seemingly not short on sonic or conceptual ideas, Am Not are going from strength to strength, where Incursions is yet another mandatory release.